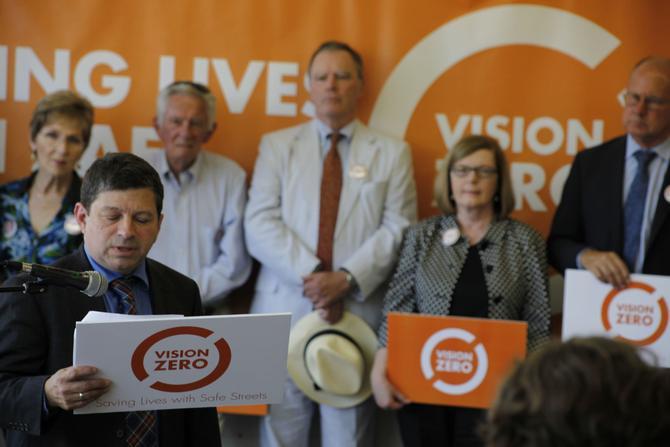 “Today is about commitment and cooperation,” said Mayor Hales, “We’re here to announce our commitment to putting an end to fatal crashes on our roadways. We’ll reach this broad goal by harnessing all of the energy and creativity of the agencies, groups and leaders represented in this room.”

Commissioner Novick noted the larger importance of advancing the Vision Zero initiative as a matter of creating more equitable neighborhoods.  “If you live in a low-income census tract within Multnomah County you are 2.3 times more likely to be killed walking,” Novick stated. “By committing to Vision Zero goals, not only will we make Portland a safer city, we’ll also make it a more equitable community for all Portlanders in all neighborhoods.”

Mayor Hales emphasized that as the Task Force develops an action plan over the next year, the City will continue to take concrete steps to make Portland roads safer. He highlighted steps that the Portland Police and the Portland Fire and Rescue will take in the coming months. These include:

Director Leah Treat, who brought the idea of Vision Zero to Portland when she took over PBOT’s helm in 2013, stressed the steps the Bureau is already taking to make Vision Zero a reality. “Vision Zero is a pillar of our work plan,” she said, “and thanks to the $29 million in funds that Mayor Hales and Commissioner Novick secured for the bureau, we are already implementing key roadway improvements on our most dangerous streets, including 122nd Avenue in East Portland and on Burnside.”

“As first responders, police arrive on the scene of many crashes, and see the impact it has on those involved, their families and the community,” said Chief Lawrence P. O’Dea, III. “In most cases, these crashes were preventable, and that’s why I’m hopeful that with our Vision Zero partners, we can work together to reduce crashes and keep all users of our streets safe.”

At the Kick-off the Task Force’s Executive Committee met and outlined the broad work agenda and goals that each Task Force member will pursue during the year. The full Task Force will meet on September 10 to begin its work.

About Vision Zero: Vision Zero is an innovative transportation safety initiative that sets the goal of eliminating traffic deaths and serious injuries from the transportation system. Vision Zero rejects the notion that traffic crashes are simply “accidents” but instead preventable incidents that can and must be systematically addressed. In July, the Portland City Council voted unanimously to adopt Vision Zero’s goal that no loss of life is acceptable on city streets as official City policy. www.visionzeroportland.com

The Portland Bureau of Transportation fully complies with Title VI of the Civil Rights Act of 1964, the ADA Title II, and related statutes and regulations in all programs and activities. For accommodations, complaints and information, call (503) 823-5185, City TTY (503) 823-6868, or use Oregon Relay Service: 711.