(August 26, 2015) Portland Bureau of Transportation (PBOT) staff presented a comprehensive report on the city’s 70-plus mile neighborhood greenway system. Neighborhood greenways are streets with few automobiles, traveling slowly, that prioritize bicycling and enhance conditions for walking. They form the backbone of the city's safe routes to school network and they make up a large portion of the low-stress bikeway network. Portland's Neighborhood Greenways Assessment Report evaluated how the routes are working, their role in the city’s transportation system, and what changes could be made both on the ground and in city policies to improve them. City council accepted the report and resolution unanimously. 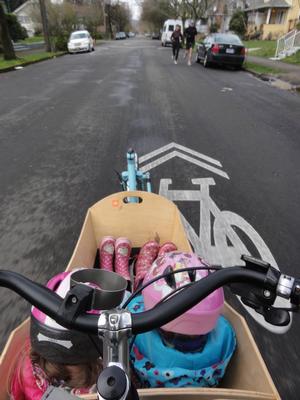 The report helps quantify and illuminate the issues presented to PBOT and provides clear guidance on how staff should address problems expressed by the community. The report includes guidelines for how neighborhood greenways should operate so that these priority bicycle routes are predictable and consistent for all roads users throughout the city.

Promisingly, the data analysis in the report shows that most neighborhood greenways are functioning very well – they are well used by bicyclists, they have few cars and the speeds are slow. However, there are a few small, critical sections where the number and speeds of automobiles is compromising the street’s comfort and safety.

Portland's Neighborhood Greenway Assessment Report can be downloaded on the neighborhood greenway homepage. An executive summary is also available on the homepage.

For an in-depth look at the report join us at the PBOT Bicycle Lunch and Learn on Thursday, Sept. 17th at noon in City Hall's Lovejoy Room.