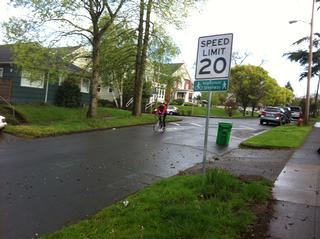 Over the 30 years since Clinton was first designated as a bike route, the design guidelines for neighborhood greenways has gone through several adjustments in order to use new safety tools and address changing conditions on the street.  There has been significant public comment recently that safety and comfort conditions on Clinton have degraded as automobile volumes and speeds increase.  It is now time to do more maintenance again.

The two primary issues the SE Clinton Neighborhood Greenway Enhancement Project will address are automobile volumes and speeds.  These are among the most important determinants of whether a neighborhood greenway is truly safe and comfortable for the broadest range of people wishing to bicycle. 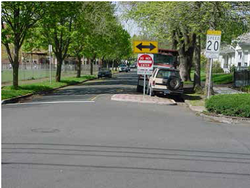 West of SE Caesar Chavez Blvd, automobile volumes on Clinton St reach as high as 3,000 cars per day. This is well in excess of the new upper performance limit for neighborhood greenways (2,000 cars/day, with the ideal being no more than 1,000 cars/day).  Much of this traffic is non-local, as data indicates that many people are using Clinton as a cut-through route instead of SE Powell Blvd or SE Division St.

To address this issue, the SE Clinton Neighborhood Greenway Enhancement Project will experiment with diverting automotive traffic at select locations to encourage access for only local traffic.

The overall safety of a street, for both pedestrians and bicyclists, is highly correlated to automobile speed.  The target speed for neighborhood greenways is 20 mph.

Recent State law allows the City to post streets designated as neighborhood greenways at 20 mph if the traffic volume is less than 2,000 cars/day.  Lowering the traffic volume west of SE Caesar Chavez would allow this important safety tool to be used on Clinton from 12th to 52nd Ave.

East of SE Caesar Chavez, where automobile speeds are the highest, there is also the opportunity to add a one of our most effective speed reduction tools: speed bumps.