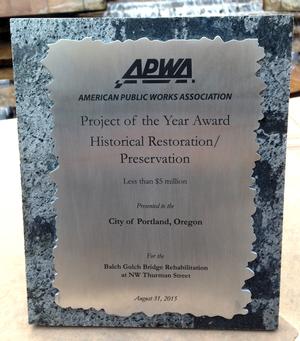 The Balch Gulch Bridge at NW Thurman Street Rehabilitation Project was awarded the APWA Project of the Year in the Historical Restoration/Preservation category at a cost less than $5 million. The bridge is 110 years old and is a noteworthy historic and engineering treasure, built during the 1905 Lewis and Clark Centennial Exposition and World’s Trade Fair as a gateway to Portland’s developing Willamette Heights neighborhood. It is Oregon’s oldest intact bridge, and is one of only few remaining of its type in the nation.

At the reopening celebration on October 10, 2014, Commissioner Novick said, “Not only does the Thurman Street Bridge have a great historic legacy, it is a hallmark of the surrounding neighborhood. Through well-coordinated collaboration of multiple City bureaus and government agencies, we were able to preserve the historic character of the bridge while modernizing it to meet today’s needs."

The rehabilitation project exemplifies the integration of contemporary uses and systems for an out-of-date structure without compromising function or historic preservation. The decision to preserve the historic bridge was inspired not only by the public and government agencies, but also by the Bridges and Structures Group at Portland's Bureau of Transportation. The age of the bridge and its poor condition, its unique characteristics, and its special place in Portland history, as well as its eligibility for the National Register of Historic Places, made the rehabilitation of the Balch Gulch Bridge the only viable option. Federal-aid funds were sought and obtained, and after a local agency match, the total project budget was approximately $4 million. 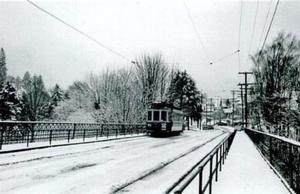 With the rehabilitation complete, the weight restriction has been lifted and fire trucks can now cross the bridge. By regaining the use of the NW Thurman Street Bridge, the response time for Portland Fire & Rescue Emergency Operations has improved in many areas of the the neighborhood by over 4 minutes! 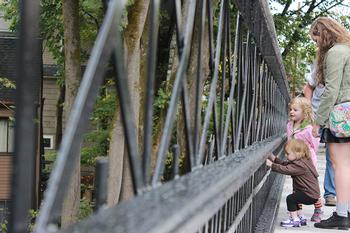 Restoration and rehabilitation of the bridge began in April 2014 with the goals: to lift the weight restriction without replacing the historic trusses; rehabilitate the bridge’s deteriorated superstructure while maintaining and honoring the historic aesthetics of the bridge; restore the original appearance of the 1905 historic bridge handrail, but strengthen it to meet modern safety standards; design the modern steel floor beams to match the shape of the deteriorated historic riveted steel beams; replace the deteriorated wood deck and riveted steel beams, while shoring the historic trusses in place; and ensure that Macleay Park would remain open to the public during construction.

The completely restored and modernized Balch Gulch Bridge at NW Thurman Street was reopened to the public October 10, 2014 during a celebration hosted by Commissioner Steve Novick and the Portland Bureau of Transportation.

Learn more about the restoration of this beautiful bridge on the NW Thurman Street Bridge Project webpage.