20,000 peak summer bike trips across the Willamette and record helmet use

(Sept. 24, 2015) – This afternoon, Mayor Charlie Hales, Commissioners Steve Novick and Nick Fish gathered at City Hall with Metro Councilor Sam Chase, Jay Walder, President and CEO of Motivate, and Ryan Rzepecki, the CEO of Social Bicycles, to celebrate the passage of Portland’s bike share by the City Council and other major milestones in Portland bicycling. This milestones include recent US Census data showing that Portlanders set a bike commuting record in 2014 and City-compiled data demonstrating high bicycling rates among women and more persistent bike use by all bicycle commuters. 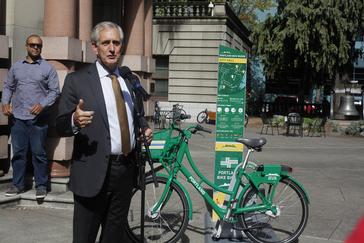 Passing unanimously, the bike share measure amends the City’s contract with Motivate, the country’s leading bike share operator. Working with Social Bicycles, Motivate will bring a next generation bike share program to Portland in summer 2016 and expand the transit options available to Portlanders.

The new system will feature 600 smart bicycles that will be available across the Central City and inner North Portland. With all of the communications and locking technology contained on the bicycles, Portland’s system will operate with fewer docking stations and kiosks and make it easier to find, reserve and park a bike. The system will also have one of the lowest price points in the country.

“Starting this summer, Portlanders will have another way to get around our great city,” said Mayor Charlie Hales, “one that is easy to use, affordable and, best of all, a lot of fun.”

“We waited a long time for the right bike share proposal, but it was worth the wait,” said Commissioner Steve Novick. “We have a great, experienced partner in Motivate; and we are taking advantage of new ‘smart bike’ technology. Bicycles are great weapons against two of the biggest threats we face: climate disruption and rising health care costs. Bike share is a great addition to our arsenal - and it's also an important tourist amenity.” 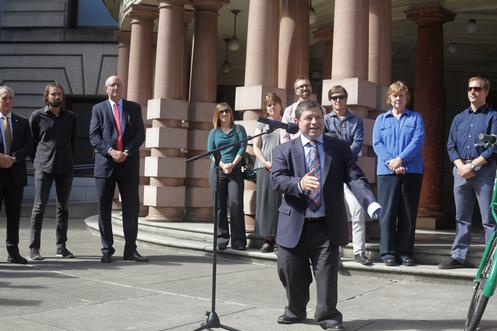 “I look forward to signing up for bike share in Portland,” said Commissioner Fish.  “What could be better than getting healthy while running errands?”

“Bike share is just the latest in a long list of innovations that set this region apart. Metro is proud of our role in making Portland’s vision a reality. I can’t wait to try bike share next year,” said Metro Councilor Sam Chase.

“Portland is one of the best bike cities in the country, and we’re tremendously excited to be a part of expanding bicycling in a community with such a robust bike culture," said Jay Walder, President & CEO of Motivate. "We will deliver one of the most innovative bike share systems in the nation, fitting the city that has been on the cutting edge of bike innovation.”

"Social Bicycles is excited to partner with Motivate and the City of Portland to deliver bike share to one of the country's most bicycle and transit friendly communities,” said Social Bicycles CEO Ryan Rzepecki. “We believe Portland has the infrastructure, bike culture, and density to become one of the most successful programs in the world."

“This has been a great week for bicycling,” said Transportation Director Leah Treat. “Census data and our own bike count clearly show that Portlanders are biking more than ever. Now with bike share, we’re making biking an even more attractive transportation option for Portlanders.”

"Today we are thrilled to invite bike share into Portland as a new low-cost form of transit,” said Rob Sadowsky, Executive Director of the Bicycle Transportation Alliance. “In fact, it is one of the most affordable steps we can take to help us reach Portland’s stated goal of having bicycle trips represent 25 percent of all trips taken by 2030. Bike share, combined with new investments downtown to provide protected bicycle lanes, will make our streets safer for everyone regardless of how they get around.”

Also today, PBOT released the Portland Bicycle Count Report 2013-14, a compendium of locally collected bicycle data that shows how bicycling is changing and growing across Portland. While the U.S. Census Bureau reports on citywide bicycle use, the Bicycle Count report includes data for bike traffic on Willamette River bridges, bike traffic by district within Portland, helmet use by district and bicycle use by women.

All of the results from the report can be found here. 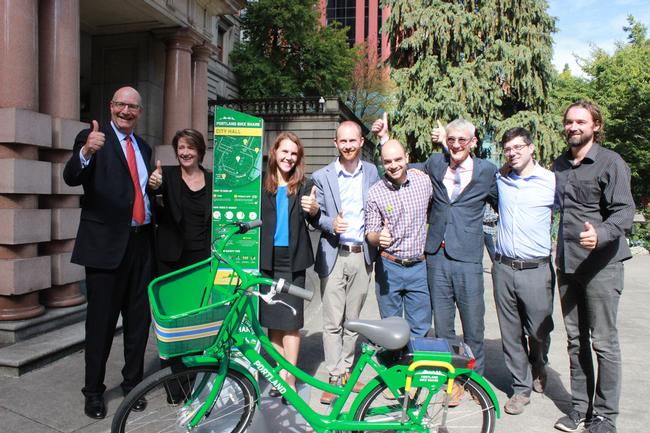 About Social Bicyles (SoBi): Social Bicycles (SoBi) is a transportation technology company based in Brooklyn, NY. The company produces a bicycle with an integrated GPS-enabled locking system that users can book via mobile app, website, or RFID access card. The company has deployed over 2,500 bikes across 18 projects in the United States, Canada, and Australia. Social Bicycles offers one global account, and users can access bikes in their expanding network of cities which includes Santa Monica, Orlando, Tampa, Phoenix, Boise, Topeka, Hamilton (Ontario), and Ottawa.