Across Portland’s diversely represented Native American communities, a unifying thread can be found swimming up the Crystal Springs Creek. In fact, according to Shawna Zierdt, member of the Cow Creek Band of Umpqua, it’s clear how closely the story of salmon and the first inhabitants of Portland are entwined. 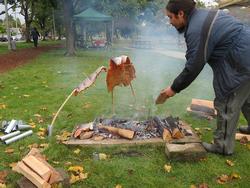 In the words of Zierdt, “we recognize salmon as a relative,” and as a First Food. A First Food is a food or resource deeply respected for its historical role in ensuring the survival of individuals and communities by providing sustenance. There resources are not viewed as merely disposable, but instead as part of a reciprocal relationship that view humans as the caretakers of the world in which we live. This respect for nature by local tribes has been carried down through the generations for over 14,000 years.

Because of this, the return of wild salmon to the Crystal Springs Creek carries both environmental significance and cultural relevance that pays tribute to Portland’s long-standing reverence for nature. It also tells an important story of resiliency. Judy BlueHorse Skelton, (Nez Perce/Cherokee) Faculty at PSY Indigenous Nations Studies and Portland Parks Board Chair says “The return of Salmon in these waters represents the resiliency and regeneration of our Native peoples in the 21st Century. We are here, and we are all working together to ensure that future generations will be here to welcome the Salmon home.”

However, this story is as much about moving forward in time, as moving back. In old times, there were abundant opportunities to connect with nature. However, just like the lives of most Americans, Portland’s Native American community live within the city. While this provides the benefits of modern living, it has also created barriers to celebrating and practicing Native American traditions. 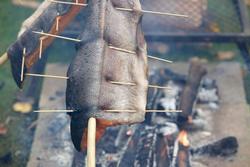 integral to having resilient, healthy communities. The generational transmission of knowledge and culture passes on the teachings for how to live here ensuring respect and responsibility to salmon for generations to come,” said Zierdt.

This need to connect with nature in modern times revived the Salmon Celebration in Portland after a 10 year hiatus. The idea, first suggested at a Native American Community Advisory Council meeting for Portland Parks and Recreation last year, also sparked a larger discussion about ways to provide a connection to the land and to the cultural significance of Salmon in Portland. After a successful first year, the Salmon Celebration is returning to Westmoreland Park, and this time is teaming up with Sunday Parkways.

* Contributors to the piece include both Judy Bluehorse and Shawna Zierdt: Judy Bluehorse, Nez Perce/Cherokee and Shawna Zierdt, member of the Cow Creek Band of Umpqua, both live in the neighborhood of Westmoreland park, serve on both the Native American Community Advisory Council to Portland Parks and Recreation and Westmoreland Salmon Celebration Planning committee.

* City of Portland Writers include Alexis Gabriel and Barbara Plummer