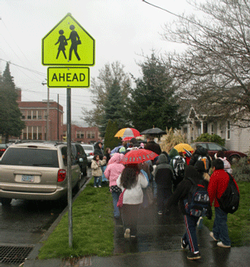 (September 28, 2015) Now that school is back in session, we’d like to bring you this reminder to reduce unnecessary idling, especially around schools and where children live and play.

Vehicle exhaust is hazardous to human health, especially for children. It’s linked to increased rates of cancer, heart and lung disease and asthma. Children, whose lungs are still developing, breathe more rapidly and inhale more pollutants per pound of body mass than adults.

Vehicle exhaust is the leading source of toxic air pollution in Oregon. Nearly half of toxic air pollutants in Oregon come from vehicles releasing sulfur dioxides, particulate matter, carbon monoxide, and other toxins that contribute to carbon dioxide (CO2) levels.

Idling is also expensive and hard on your engine. Ten seconds of idling uses more fuel than restarting your engine and just one hour of idling burns about one gallon of gas with zero miles per gallon. Finally, an idling engine is not working at peak temperature so fuel doesn’t fully combust, causing damage to engine parts.

What can you do?
• Turn it off – if you are going to be stopped for more than 10 seconds (especially around schools and where children live and play)
• Reduce warm up idling – modern engines don’t need more than 30 seconds of idling to warm up
• Spread the word – talk to family, friends and neighbors about the benefits of reduced idling and encourage them to join you in contributing to a healthier community and in saving money