Sunday Parkways made it a priority this year to reach out to fill as many of its high-level volunteer leadership roles as possible with strong, engaged women from Portland's cycling community. 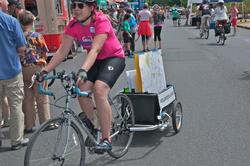 The volunteers who perform this role are, every one of them, some of the most amazing people in the City of Portland– and many amazing women have performed this role over the years. The effort to recruit female leaders for Sunday Parkways is about much more than simply gender-balancing the Sunday Parkways volunteer base. It’s about the core mission of Sunday Parkways to build community and foster connections among the citizens of Portland, half of whom are women. It’s about maintaining the diversity of perspectives that help make any community stronger, more intelligent, more versatile and capable. It’s about fostering female leadership in a male dominated bike culture and the wider culture in which we live. It’s about fostering professional relationships among female leaders. 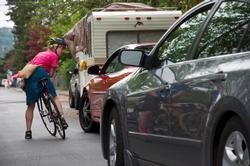 This year, Sunday Parkways’ volunteer organizers made an impassioned request through many different networks, some directly connected to Sunday Parkways, and some completely separate. The response was encouraging: the number of women volunteering for and expressing interest in the higher-level roles across the event doubled between East Sunday Parkways (May) and North Sunday Parkways (June). The attention paid in specifically engaging female volunteers continued to result in new connections throughout the season, and has put Sunday Parkways in an excellent position to begin 2016 with the strongest female volunteer leadership the event has seen so far. Stay tuned for 2016!