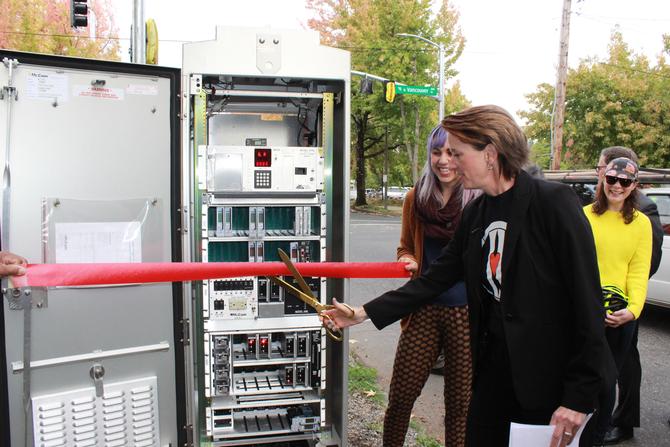 (October 14, 2015) Local business owners and community members from the Boise and Eliot neighborhoods gathered today at the intersection of North Vancouver and Cook to activate a new traffic signal installed by the Portland Bureau of Transportation. The signal will improve safety for people riding bicycles on Portland’s busiest bike route and people walking will now have crosswalks and pedestrian signals - making it easier and safer for them to navigate their community.

The new signal at North Vancouver and Cook fills a long-standing traffic need sought by the community. The Fremont Bridge opened in November 1973, but traffic signals were not installed on the nearby streets, creating traffic flow problems and safety concerns at nearby intersections. The unsignalized intersection at North Vancouver and Cook has been on the City’s top 10 list for right angle crashes. 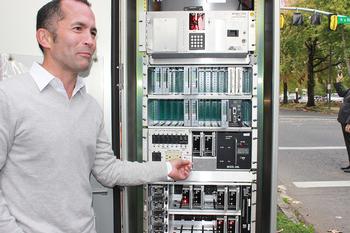 The event highlighted the positive impact of the North Vancouver Avenue and Cook Street Local Improvement District. A Local Improvement District (LID) is a partnership between PBOT and a group of local property owners. The property owners pool their resources to share the cost of transportation infrastructure improvements. PBOT manages the design and construction of the project.

“Credit goes to the members of the Boise and Eliot neighborhoods and the local business community – many of whom have been advocating for this traffic signal for a very long time,” said Portland Bureau of Transportation Director Leah Treat, “It is because of their community spirit and persistence that we have this signal here today.”

The North Vancouver and Cook Street LID was approved by City Council in May 2014 and included six participating property owners. It was the first LID in the city to focus primarily on traffic signals and utility undergrounding. It raised $1,055,000 for the following improvements: 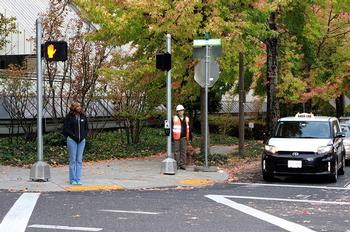 LIDs have proven an effective tool for achieving economies of scale and allowing a community to implement comprehensive and complete infrastructure solutions for their neighborhoods. More information about Local Improvement Districts can be viewed on the bureau’s website.