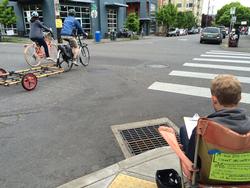 (October 21, 2015) Every summer, volunteers across Portland stand on street corners and at trailheads, clipboards in hand, to take a census of the city’s bike and pedestrian travelers. This year, PBOT recruited more than 150 volunteers to conduct these counts at 281 different sites across town. Spanning four months, volunteers tallied close to 240,000 people walking and biking.

Most of these counts were completed as part of Portland’s annual bicycle count, occurring every summer June through September for more than ten years. The counts are used to estimate how many bikes are riding on a daily basis. Each of these 235 two-hour counts track turning movements at an intersection, usually where two bikeways meet (such as a street with a bike lane and a neighborhood greenway). The most bikes at a single intersection were counted at N Vancouver & Russell (a 7-9am count) with an amazing 1,028 bikes tallied.

A question we get asked a lot is, why count gender? Portland Bicycle Coordinator Roger Geller answers this question in the most recent bike count report for 2013 & 2014 counts. Regarding gender, Geller says,

Cities with high bicycle use typically achieve a balance between male and female ridership. Gender parity in bicycling is considered an important indicator of success in creating safe, comfortable and attractive conditions for bicycling.

Portland’s gender split is pretty good compared to other major US cities, but still not quite 50/50.

This summer Portland was asked to participate in an international bike count to establish gender split at a global level through the Bicycle Network in Australia. Several intrepid volunteers stuck it out on frosty mornings in October to collect rush hour results at fourteen different sites. Female rider mode share ranged from a high of 42% at NE Tillamook & 7th down to just 20% at SW Columbia & 14th. Complete results aren’t in yet, but PBOT is excited to continue to grow and set an example on the international stage. For more info on the global bike count, see here: https://www.bicyclenetwork.com.au/general/for-government-and-business/3533/.

The remaining 46 counts this summer were completed as part of the National Bicycle and Pedestrian Documentation Project, which collects counts for one week in September every year. PBOT and Metro team up each year to count pedestrians and bicyclists utilizing Portland’s trail system. Sites are located on the Springwater Corridor, Willamette Greenway, I-205 Trail, several of the Willamette River bridges, and more.

Many sites are counted on a mid-week day during evening rush hour as well as a weekend morning. The highest weekday count occurred on the Hawthorne Bridge with a whopping 1,233. The amazing part is that this includes the south side of the bridge only, where most bikes are headed eastbound (combined total for both sides was 1,663!). The highest weekend count was found on the Eastbank Esplanade near OMSI and the new Tilikum Crossing where 1,181 trail users passed by. The trail count also tracks gender of trail users. Of all users, just under 40% were female; 31% of people on bikes and 50% of people walking were female.

Overall, PBOT saw an amazing volunteer turn-out for these two count projects. Portland has one of the most robust bike and pedestrian databases across the country, and it would not be possible without all 562 hours of volunteer work to complete counts this year. Most volunteers come back for more counts after their first year, and many conduct multiple counts in one season. PBOT always needs more volunteers to count!

To learn more about the counts (including past data and getting connected to volunteer), check out these links:

For a complete analysis of Portland’s 2013 & 2014 bike counts, check out the report at http://www.portlandoregon.gov/TRANSPORTATION/article/545858.