With partnership in place, system set to grow 66 percent to 1000 bikes

(January 7, 2016) – This morning, Transportation Commissioner Steve Novick, Nike Vice President of Global Community Impact Jorge Casimiro and Bureau of Transportation Director Leah Treat announced Nike as the title sponsor of the city’s new bike share system. The agreement is valued at $10 million and has an initial term of five years.

The partnership with Nike will allow the City to expand the initial number of bike share bicycles available to the public and puts the system on a trajectory of sustainable, long-term growth. When the Portland City Council voted unanimously to create Portland Bike Share last September, it authorized a system with 600 bikes. With Nike as title sponsor, the system will now launch with 1000 bikes, a 66 percent increase. 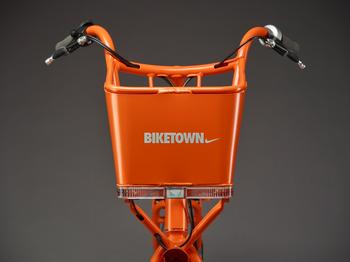 The bike share program and bicycles will be called BIKETOWN, and Nike revealed the innovative visual identity for the program’s standard bike at a press conference with city officials and community partners at its Portland Community Store in Northeast Portland. The store is near the site of a proposed bike share station. As part of the unique collaboration between Nike and the City of Portland, Nike will also oversee the design and branding of the system’s logo, stations and digital presence.

In what City officials characterized as a first-of-its-kind commitment, Nike also announced plans to unveil a select number of additional limited edition bike wrap designs unique to Nike. These designs, to be shared at a later date, will reflect the city’s creative spirit. This aspect of the partnership, along with the ability to bring 400 more bikes to the system, elevates Portland’s bike share program.

“This is how public-private partnerships should be done,” said Commissioner Steve Novick. “We have developed an innovative, next generation bike share system. And in Nike, we have a sponsor that is a brand powerhouse and a global leader in innovation with a long and distinguished record of supporting sports and physical activity in Portland. It’s a perfect fit.” 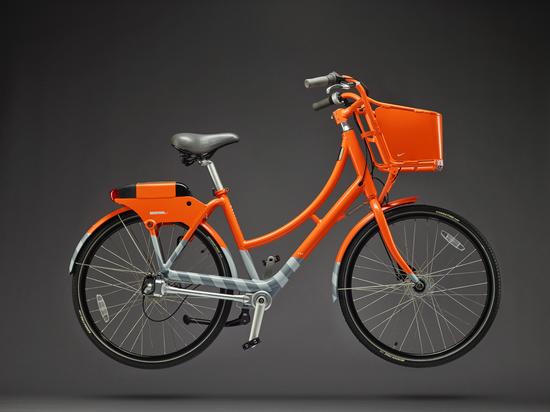 “We’re proud of our long history of partnership with the City of Portland and believe that the BIKETOWN bike share  program is one more example of how we can work together to help make Portland an even more active, vibrant and innovative community – goals Nike and the City of Portland share,” said Nike VP of Global Community Impact Jorge Casimiro. “BIKETOWN is the perfect way to help Portland residents and visitors incorporate daily physical activity into their lives. We’re thrilled to bring inspiration and innovation as a brand to get more people moving across this beautiful city so many of us call home.”

“Commissioner Steve Novick and the Portland Bureau of Transportation’s dogged determination in making sure Portland has a bike share program is inspiring,” said Congressman Earl Blumenauer, “Nike, bike share, and Portland make a terrific team. While Portland may not be the first, with Nike’s support and partnership, I have no doubt our program will be the best. I look forward to doing anything I can to assist in this exciting effort.” 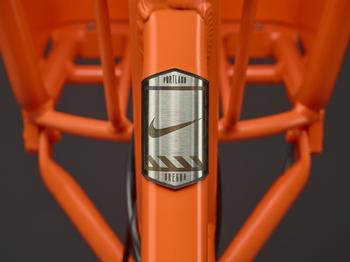 “This is a great day for bike share and a great day for Portland,” said PBOT Director Leah Treat. “Developing a world-class bike share system was something I promised to Portlanders when I joined PBOT two years ago. With Nike as a sponsor, we’re going to deliver on that promise in a huge way. I’m excited because bike share is a proven tool to increase bicycling and because Portlanders and visitors alike will have another option for getting around our great city.”

Portland’s bike share system is set to launch in July 2016. It will be operated by Motivate, a global leader in bike share. "We are delighted to work with Nike and PBOT, two incredible partners, to bring the nation's most innovative bike share system to life," said Jay Walder, President and CEO of Motivate, the nation’s preeminent urban bike share provider and the operator of BIKETOWN bike share. “Thanks to Nike’s dynamic collaboration, Portland will almost double the number of bikes available at its launch, adding to its already bike-friendly culture and attracting new people to take a ride.

Portland’s bike share bicycles will be supplied by Social Bicycles (SoBi), a transportation technology company based in Brooklyn, NY. SoBi revolutionized bike share by pioneering the smart-bike approach. Instead of relying on expensive docks and kiosks, SoBi places all the communications and locking technology on the bike itself.

With all of the communications and locking technology contained on the bicycles, Portland’s system will make it easier to find, reserve and park a bike. The system will also be one of the most affordable in the country. The launch of the system has been financed with a $2 million federal grant approved by Metro Council in 2011. Expansion of the system from 600 to 1,000 bicycles and the operating costs will be financed by the $10 million sponsorship agreement. In addition, user revenues will help offset operation costs. No city money will be used for bike share operations.

About Nike: NIKE, Inc., based near Beaverton, Oregon, is the world's leading designer, marketer and distributor of authentic athletic footwear, apparel, equipment and accessories for a wide variety of sports and fitness activities. Wholly-owned NIKE, Inc. subsidiary brands include Converse, which designs, distributes and licenses casual sneakers, apparel and accessories; and Hurley, which designs and distributes a line of action sports and youth lifestyle apparel and accessories. For more information, NIKE, Inc.’s earnings releases and other financial information are available on the Internet at http://investors.NIKE.com and individuals can follow @NIKE.