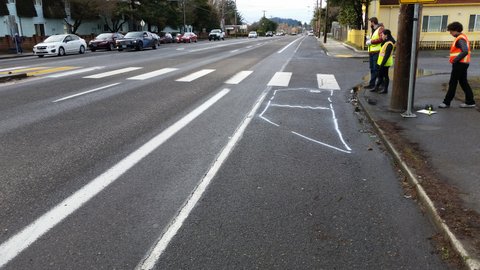 (January 15, 2016) - Staff from the Portland Bureau of Transportation's Traffic Engineering, Public Works and Signals and Streetlights teams were on the scene at SE 156th Avenue and Division Street on Thursday, following a pedestrian fatality at the location on Tuesday, January 12. 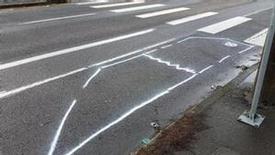 Staff marked the road for a temporary Rapid Flashing Beacon to be installed at the crossing. Weather permitting, the new beacon will be operational by January 25th. The permanent fix, which includes installing a Hybrid Signal and new crossing at 157th, is being expedited as well. During the visit a new LED street light on the south side of the crossing was installed and activated as well. The new street light immediately improves visibility for everyone at the crossing. 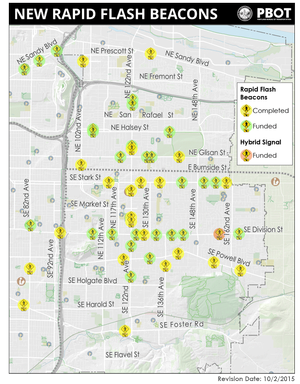 This beacon installation is in addition to the 17 other beacons installed as part of the East Portland Rapid Flash Beacon Project. The project will improve pedestrian and bicycle crossing safety at arterial intersections in outer eastside Portland. The project implements safety improvement recommendations from the East Portland in Motion (EPIM) Plan, adopted by City Council in 2011. EPIM is a five year implementation strategy for enhancing active transportation in neighborhoods east of 82nd Ave, which identified over 80 priority construction projects and programs. Funding for the Rapid Flash Beacon Project comes from a grant from the State of Oregon through Representative Shemia Fagan.

Additional improvements are planned for SE Division as part of the East Portland Access to Transit project. These include sidewalk infill from 102nd to 145th and four additional Rapid Flash Beacons at 115th, 131st, 139th and 142nd. The project is currently in the design and engineering phase. It will also include the 130's Neighborhood Greenway, which will cross SE Division at 157th. Once design and engineering is complete later this year, PBOT will submit the project to the Federal Highway Administration and ODOT for approval.

Other major changes for this area of SE Division are likely to come from the Powell-Division Transit and Development Project.

Portland is a Vision Zero city (www.visionzeroportland.com). PBOT believes the death or serious injury of even one person on Portland roadways is one too many. That’s why the bureau is actively working to identify and improve safety in East Portland and across the city.