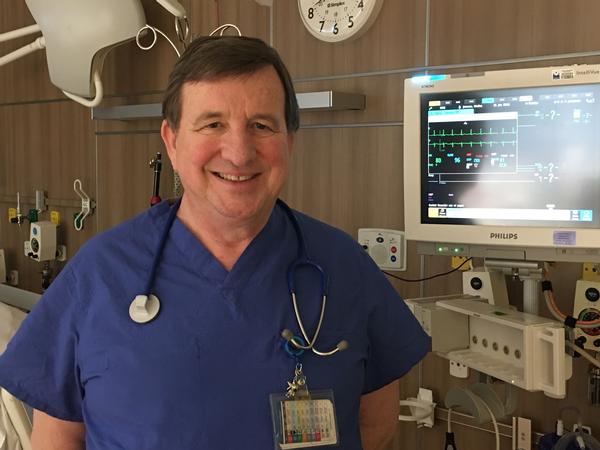 "More than 95% of the injuries I see are entirely preventable," says Michael Morrison, B.S.N.

(February 1, 2016) - Portlanders deserve safe streets on which to walk, bike, operate mobility devices, access transit, and drive. The Portland Bureau of Transportation aims to make our transportation system the safest possible and to move towards zero traffic-related fatalities and serious injuries in the next 10 years. This effort is known as Vision Zero.

Achieving Vision Zero requires the input of a diverse group of partners from across the city and uses a variety of tools to inform the strategies for achieving this important goal. Our community-wide effort now includes Portland’s Police and Fire Bureaus, regional and state government and partners in emergency response, public health and community organizations.

Task Force member Michael Morrison, B.S.N., has been a critical care nurse for the past 39 years. A graduate of the OHSU School of Nursing in 1977, Michael currently works as a trauma nurse at Legacy Emanuel Medical Center, a Level I Trauma Center, where he cares for patients in the Neuro-Trauma Intensive Care and responds to incoming patients as part of the resuscitation team in the emergency and operating rooms. In short, says Michael, “Most of my career has been on the frontlines of dealing with the aftermath of injuries and fatalities.”

In addition to bedside patient care, he is a coordinator for Legacy Health Trauma Nurses Talk Tough (TNTT). TNTT is a nationally recognized injury prevention program and recipient of the prestigious NOVA award from the American Hospital Association. As a national leader, TNTT has developed several unique traffic safety classes. Michael partnered with community traffic safety advocates to develop the High Risk Driver Class and the Share the Road Safety Class. Says Michael, “As we improve our medical care in saving lives and reducing the consequences of injury, the most valuable health care approach is prevention. More than 95% of the injuries I see are entirely preventable.”

Michael helped pioneer Legacy’s Bicycle Helmet Program that has distributed more than 130,000 low cost and free helmets since 1992 in the Portland metropolitan area. Michael raised five children; bicycling for fun and commuting is still a part of their lives.

Says Michael about serving on the City of Portland’s Vision Zero Task Force, “It is an honor for me to work with community leaders, law enforcement, safety advocates and traffic safety planners on the Vision Zero Task Force. Reaching the goal of Vision Zero is achievable with a diverse group of community partners leading the way. Public involvement can significantly reduce injuries and minimize fatalities; I am proud to be sharing in this effort.”

See the following link to a recent Legacy ad highlighting their partnerships to improve health in our community; Michael and the helmet program is featured in this 30 second spot:

The Vision Zero Task Force is charged with providing direction on the Portland Vision Zero Action Plan, including developing the vision, goals, policies, actions, performance measures, and recommendations to get to zero traffic fatalities and serious injuries. In addition, Task Force members act as liaisons to the organizations and agencies they represent and will be ongoing champions for implementation of the Vision Zero Action Plan. Working together we will save lives.