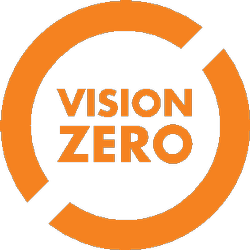 (Feb. 8, 2016) – The newly improved crosswalk at SE 156th and Division Street was dedicated this morning in a short ceremony that also acknowledged the three fatalities that occurred at the location in recent years. The Portland Bureau of Transportation (PBOT), along with Oregon & Southwest Washington Families for Safe Streets and Oregon Walks, met at the new Rapid Flashing Beacon to discuss why the safety improvements at the crossing and other Vision Zero actions are so important for the people of Portland. Following the most recent fatality on January 12, 2016, PBOT added a temporary Rapid Flashing Beacon - the first in a series of changes PBOT will be making to this area. In addition to the temporary beacon, a hybrid beacon one block east at 157th will be installed and the TriMet bus stop will be relocated.

PBOT also released its 2015 Portland Traffic Safety Report which includes data on the number of traffic-related fatalities in 2015 and discusses trends and key contributing factors. Among the report’s findings, PBOT found that High Crash Corridors, which represent just 3% of Portland’s road network, were the site of 27% of the traffic fatalities in 2015. SE Division Street is one of Portland’s High Crash Corridors. In 2015, 9 of the city’s traffic fatalities were in East Portland, of which 3 were pedestrian fatalities. In addition, 54% of fatal crashes in Portland in 2015 included at least one person who was under the influence of alcohol or drugs.

“As a Vision Zero City we are committed to the idea that every death or serious injury on our streets is one too many,” said PBOT Director Leah Treat. “Our 2015 report makes it clear why Portland needs a comprehensive safety initiative like Vision Zero. All Portlanders deserve safe streets and that’s why the Portland Bureau of Transportation is so committed to implementing Vision Zero.”

Pedestrian safety is a high priority for PBOT, especially on arterial roadways, where data shows people are most at risk. As most pedestrian fatalities occur when pedestrians are crossing the street, PBOT is focusing its Vision Zero efforts on improving crossing safety. With the help of federal grants, state funds, and local partnerships the Bureau is rolling out a significant number of crossing improvements utilizing Rapid Flashing Beacons on roadways throughout East Portland. In the coming weeks, PBOT will be activating additional flashing beacons all across East Portland.

In addition to these infrastructure improvements, the City of Portland’s Vision Zero Task Force continues to move forward with prioritizing the safety actions that the City will take to reduce fatalities and serious injuries in Portland. The Vision Zero Task Force, with members from Portland’s Police and Fire Bureaus, regional and state government and partners in emergency response, public health and community organizations – including Oregon Walks and Oregon and SW Washington Families for Safe Streets - will be targeting a wide range of issues including DUII, infrastructure improvements and policy. The next Task Force meeting is on February 25.

Oregon Walks is the state's pedestrian advocacy organization. We advocate to ensure every person, regardless of income, ability or geography, can interact with their community by walking. Oregon Walks is dedicated to promoting walking and making the conditions for walking safe, accessible and attractive to everyone.

Oregon and SW Washington Families for Safe Streets is comprised of victims of traffic violence and families whose loved ones have been killed or severely injured by aggressive or reckless driving and dangerous conditions in Oregon and SW Washington.  Through our stories and advocacy, we seek cultural and physical changes on our streets and the rapid implementation of Vision Zero. We envision communities where pedestrians, bicyclists and vehicles safely co-exist, and children and adults can travel freely without risk of harm – where no loss of life in traffic is acceptable.