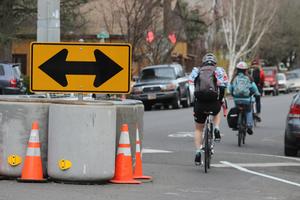 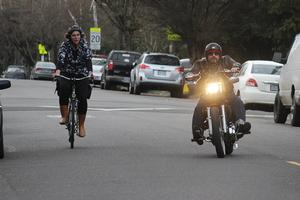 (February 11, 2016) - Wednesday’s traffic enforcement and education action by the Portland Bureau of Transportation and Portland Police Bureau on SE Clinton Street between SE 12th Avenue and SE 50th Avenue generated 15 citations and 6 warnings for people driving motor vehicles and 2 warnings to people biking with no lighting. Officers from PPB also distributed Vision Zero pamphlets with information about safe travel for people who walk, bike and/or drive with every traffic stop.

During the enforcement action, police were on the lookout for violations that threatened the safety of people walking and biking. These violations included people driving who violated “do not enter- except bicycles” sign, illegal and unsafe U-turns, and people driving vehicles (including scooters and motorcycles) through the new diverters. Police also monitored stop sign compliance on streets surrounding Clinton, including the SE Woodward and 32nd Avenue intersection.

The stops were primarily for Failing to Obey a Traffic Control Device. Three charges were for Illegal U-Turn. All three of those were for people in vehicles who turned right at the SE 17th Street diverter, made a U-Turn and then retuned to make another right to continue along SE Clinton. The last contact of the day was at the SE Clinton and SE 17th diverter at approximately 11:00 p.m. when a person driving was arrested for DUII (.14 BAC).

The enforcement action was a component of the education and outreach program for the Clinton Neighborhood Greenway Enhancement Project, whose goal is to address auto volume and speed issues and make the greenway more inviting for people who are walking and biking. During the public meetings to discuss the project, community members asked PBOT to initiate an education and enforcement campaign to make drivers aware of the unique role that neighborhood greenways play in encouraging walking and biking. The Portland City Council has also made a commitment to protect and enhance the city’s neighborhood greenways.

Education and enforcement actions such as the Feb. 10 event are a key part of the City of Portland’s citywide effort to reach its Vision Zero goal of eliminating traffic fatalities and serious injuries. Find out more about PBOT’s safety work and Vision Zero, PBOT’s goal of making our transportation system the safest possible and moving towards zero traffic-related fatalities and serious injuries by 2025: www.visionzeroportland.com.