(February 12, 2016)  The Portland Bureau of Transportation (PBOT) and Portland Police Bureau have scheduled a safety education and enforcement action for SE 82nd Avenue near the Portland Community College (PCC) Southeast Campus. This action will take place on Wednesday, February 17, from 11:30 am to 1:00 pm at the Division Street intersection crosswalk and at the midblock crossing on 82nd Avenue. 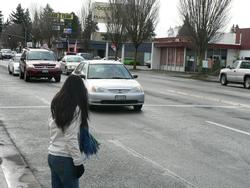 Many people on foot and in vehicles cross this section of SE 82nd Avenue every day, going to and from bus stops, restaurants and coffee shops, PCC Southeast Campus, businesses, and other retail outlets. While most people walking use the marked crosswalk at SE 82nd Avenue and SE Division Street, some people choose to cross at midblock locations between SE Division and SE Harrison Streets.

The purpose of these actions is to raise awareness of pedestrian safety and Oregon traffic laws. They are also a key part of the City of Portland’s citywide Vision Zero efforts and goal of eliminating traffic fatalities and serious injuries.

During the education and enforcement action, police officers will remind drivers to stop appropriately for pedestrians in the crossing, encourage people walking to cross at the corner, and enforce Oregon traffic laws. Students from PCC Southeast Campus will assist PBOT staff by handing out brochures and encourage people attempting to cross midblock to instead cross at the intersection.

The Oregon Department of Transportation (ODOT) will be installing a midblock crossing with a Rectangular Rapid Flash Beacon (RFFB) on SE 82nd Avenue near PCC. ODOT plans to start work on the new marked crossing and RRFB during the last week in February and expect the work to be finished by October.

Learn more about the safety education and enforcement action here.