(April 19, 2016) According to the most recent U.S. Census data, Portland commuters choose to pedal slightly more than 7 percent of the time, using bikes at the highest rate of any major U.S. city. Portland also leads the nation in active trips to school, with local K-8 school children an 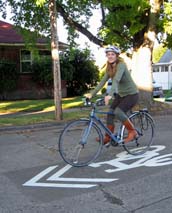 d their families embracing walking, biking and rolling to school 42 percent of the time. Despite these positive trends, the majority of Portland residents still choose single occupancy car trips as their primary mode of transportation.

Besides the diminished community health and safety concerns of a car-dependent society, Portland's growing population and increased road congestion threaten the region's economic vitality and livability if nothing is done to get more cars off roads. Most personal everyday trips are three miles or less and easily can be done by walking, bicycling and transit. This is where SmartTrips comes in.

SmartTrips, or some form of individualized marketing program for active trips, has been delivered to Portlanders since 2003. For the last three years, SmartTrips has been reaching out to new movers, including people new to Portland and those who have changed neighborhoods. Moving is a great time to consider new ways to get around because with new environs, you are already forced to create new travel patterns.

Since 2014, SmartTrips has provided information to over 73,000 new mover households, and our bicycle delivery staff has delivered more than 8,000 personalized transportation packets to people's doorsteps. As a result, participants in our program report they are walking, biking and taking transit more than before. In fact, they are driving almost 12 percent less than prior to moving for both neighborhood trips and for getting to work. The primary goal of SmartTrips is to reduce drive alone trips while increasing active trips.

The first SmartTrips order forms went out to new movers in March and we have already received over 1,000 orders for customized transportation packets filled with maps and information to help people make healthy new travel habits for getting around Portland. Beginning in May, SmartTrips will offer our great menu of Ten Toe Express walks, and bike rides and classes offered through Portland By Cycle.