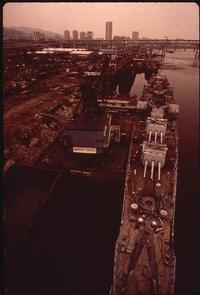 The extension of SW Bond Avenue continues over 20 years of planning and infrastructure provision to support redevelopment in the South Waterfront District. The City has been working with property owners, development teams and other stakeholders to gradually transform this once largely industrial area into a thriving mixed-use community with a range of employment, housing and retail options along with public amenities such as parks and trails. Realizing the vision for the district requires building a system of streets for people to access places by foot, mobility device, bike, transit, car, truck and emergency vehicle.

Most of the South Waterfront District south of SW Gibbs Street (the base of the Portland Aerial Tram) features an existing street grid built over the past 15 years. From SW Gibbs Street northward to the Marquam Bridge, street infrastructure is limited and several large properties are in the planning and development process. 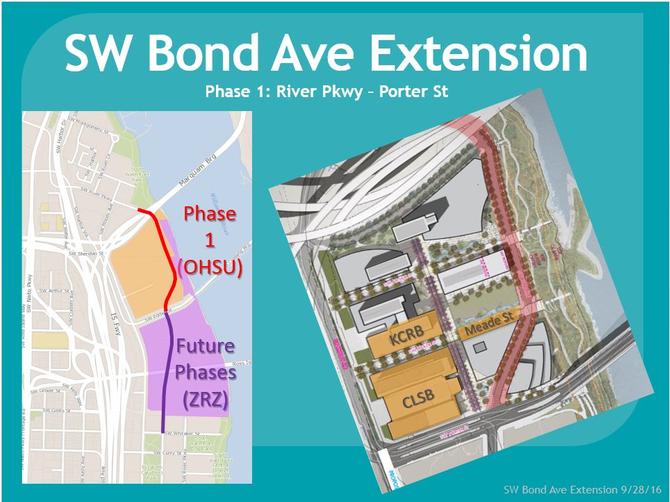 SW Bond Avenue is intended to be a major north-south street serving the full length of South Waterfront and connecting it to the rest of the Central City, similar to SW Moody Avenue today. Once complete in its entirety, SW Bond Avenue will become a “couplet” with SW Moody Avenue, with Bond hosting one-way northbound car and bike traffic while Moody handles southbound traffic. The street will be built in multiple phases.

The portion of SW Bond Avenue currently under construction is a 0.3-mile segment between SW River Parkway (which previously ended in a cul-de-sac under the Marquam Bridge) and SW Porter Street (which serves as the west end of the Tilikum Crossing bridge). This part of Bond, known as Phase 1, will serve the OHSU Schnitzer Campus, including the recently completed Knight Cancer Research Building. Completion of SW Bond Avenue Phase 1 is scheduled for summer of 2019.

Construction of subsequent segments of SW Bond Avenue will depend upon the timelines of adjacent development by the Zidell companies.