When Phase 1 of the SW Bond Avenue Extension opens in 2019, it will have an “interim design” that includes one motor vehicle travel lane in each direction, a northbound separated bike lane, on-street parking and temporary asphalt sidewalks. During this interim phase, Bond will be open to motor vehicle traffic between SW River Parkway and SW Meade Street (an east-west street being constructed by OHSU.) Between future SW Meade Street and SW Porter Street (Tilikum Crossing), Bond will be open to pedestrian and bicycle traffic only.

As development occurs incrementally along SW Bond Avenue, permanent improvements will be installed including concrete sidewalks, landscaping and other design features. The timing of these permanent improvements will depend on the timelines of adjacent development, including the OHSU Schnitzer Campus and the South Waterfront Greenway. PBOT will be engaging the Portland Design Commission and working with Portland Parks & Recreation, OHSU and Zidell to ensure a cohesive final design of SW Bond Avenue and surrounding public spaces. 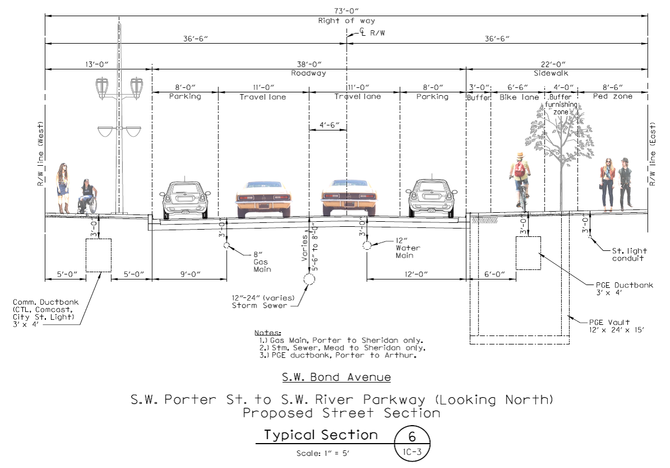 Eventually, when SW Bond Avenue is extended to SW Whitaker Street (one block south of the Portand Aerial Tram), SW Bond Avenue will be converted to one-way northbound vehicle and bicycle traffic, with southbound traffic served by SW Moody Avenue.

Much of SW Bond Avenue will be elevated and built on retaining walls to match other streets and developments in the area, including the west landing of the Tilikum Crossing.