Click here for the latest information on Flanders Crossing, including an updated project timeline.

(August 19, 2016) - Portland’s next bridge won’t be built over water, but instead over I-405. Today it was announced that the Flanders Crossing bridge has been funded by the Oregon Transportation Commission and that construction could begin as soon as April 2018. The Portland Bureau of Transportation (PBOT) is providing $3 million of the $5.9 million cost; $2,877,000 is coming from the state’s ConnectOregon program. 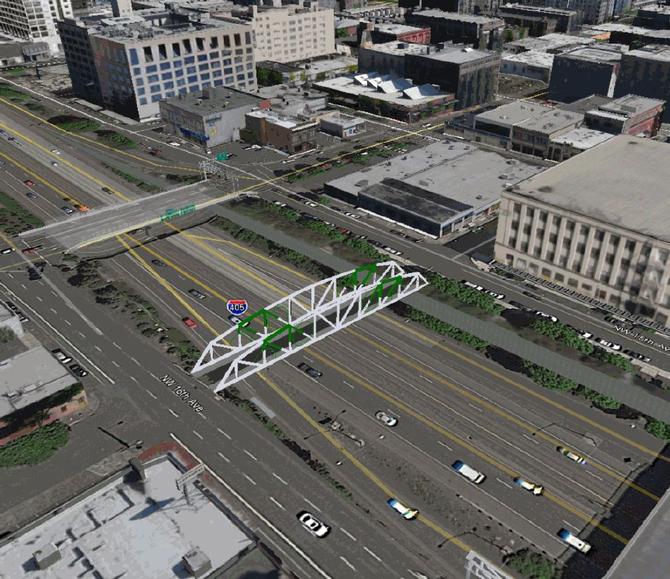 The bridge’s design was chosen after a thorough evaluation process that examined the best options in regards to equity, environmental concerns, and economic prosperity. The bridge, designed to be about 250 feet long and 24 feet wide, will be for pedestrians and people on bikes, with no lanes for car traffic or transit. On each side of the bridge will be a 6 foot sidewalk for pedestrians, and on the inside will be two 6 foot lanes for bicycles. This separation of uses eliminates any conflicts between bicycles and pedestrians. Also included in the project are new crossings at NW 15th and 16th to help people get onto and off of the bridge.

Strong support for Flanders Crossing was shared throughout the adjacent neighborhood and the business communities, including the Pearl District Neighborhood Association, Northwest District Neighborhood Association, Pearl District Business Association, the Pacific Northwest College of Art and more. This support shows that people are beginning to understand the value of biking and walking. Not only are they healthier and more sustainable alternatives to driving, but they can also assist in building the economy and community. With all of these factors, it’s clear that Flanders Crossing will be an important and worthwhile addition to Portland’s transportation network. 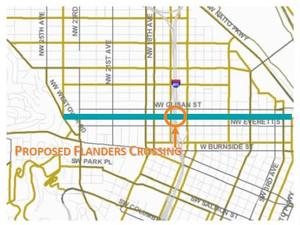 Right now, there are no crossings like this over I-405. All other options for people on foot or bike essentially require crossing freeway onramps. These routes are often congested and do not provide sufficient space for those using active transportation. The Flanders Crossing will provide a safer alternative and will open up the option of walking and biking to people who don’t feel comfortable crossing the freeway at other locations.

The predicted numbers for how many people will use Flanders Crossing are huge. Including the potential neighborhood greenway, there could be an estimated 9,100 daily trips across Flanders Crossing. Although this number combines walking and biking trips, it is still around five times the amount of bike rides taken across the Tilikum Crossing each day.

How could this comparatively smaller bridge generate so much usage? The key is in the location. Over the past couple years, more and more housing has been built in the Pearl District, and more jobs have been cropping up in the Northwest District. The ability to live and work in a thriving downtown area where active modes of transportation are all you need to get around is drawing top talent. This draw in turn attracts businesses that want those talented individuals working with them. This dynamic is what has businesses such as Airbnb and Vestas supporting the Flanders Crossing project. The bridge will provide a crucial link for people living and working in different parts of NW Portland.

The bridge is not the only plan the City has to improve active travel in this area. The overall plan is to build a neighborhood greenway on Flanders stretching from NW 24th to the Steel Bridge, with Flanders Crossing being part of that. This greenway would create a low-stress east-west path through the city. Although the funds received only cover the project and not the improvements necessary to implement a neighborhood greenway the City is committed to the entire project and is actively seeking ways to make it happen.

And, if all of these reasons aren’t enough, Flanders Crossing could also serve a critical role in the event of an earthquake. Since it would be built to modern seismic standards, the bridge would be designed to be resilient to a 9.0 quake - meaning it may be the only route left standing to cross I-405 were such an earthquake to occur. This resilience will allow people on foot and on bike, as well as emergency vehicles, to cross over this divide.

From the safe passage it will provide, to the opportunities it will open up, and the economy it will help promote, PBOT is very excited to be making Flanders Crossing a reality.

ConnectOregon focuses on improving connections among modes of travel while supporting Oregon’s economy. Dedicated to non-highway projects, ConnectOregon was first approved by the Oregon legislature in 2005 and has funded more than 180 marine/ports, aviation, public transit, bike/ped and rail projects around the state with more than $380 million in funds generated by lottery-backed bonds.

For ConnectOregon VI, 75 applications, requesting a total of $88,402,249, were evaluated by modal committees and regional committees before going to the Final Review Committee. ConnectOregon includes grants for private sector applicants, municipalities, cities, counties, governing organizations, and other transportation-related entities. Considerations for qualified projects include reducing transportation costs for Oregon businesses, economic benefit to the state, critical links connecting transportation modes, readiness for construction, project cost borne by the applicant, and project useful life expectancy the offers maximum benefit to the state. To see details about the program and the projects, visit the ConnectOregon website.