Sunday Parkways is honored to be able to show off the new and improved Sellwood Bridge for the Sellwood-Milwaukie Sunday Parkways Route. Here is a little peep into its history and the start of a new era.

Removal of Old Sellwood Bridge marks end of an era 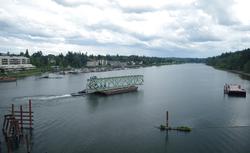 After 90 years of serving the public, the original Sellwood Bridge will be only a memory in a week’s time. The last steel span of the original bridge is scheduled to be lowered to a barge on July 12.  Removing the old bridge has been one of the most visually interesting parts of the Sellwood project, with many people watching as a familiar landmark slowly disappears.

To understand how the bridge is being deconstructed, it helps to remember its history.

About the demolition team

Since the old bridge was built as one continuous 1100-foot long span, it could not easily be dismantled and removed in sections. It was also coated in lead-based paint, a known health hazard. A specialized team was assembled to deal with these challenges and get the old bridge safely down.

General contractor Slayden-Sundt and McGee Engineering teamed with Emmert International of Clackamas. Emmert International has moved complicated structures ranging from the Spruce Goose (the gigantic wood airplane built by Howard Hughes, which was delivered to the Evergreen Aviation and Space Museum in McMinnville) to the Hotel Fairmount in San Antonio (the largest building ever moved on wheels).

In the past (and still in some parts of the world today) old bridges are taken down with explosives. This has not been done in Oregon for decades, for obvious environmental and safety reasons. Instead, the old Sellwood Bridge is being cut into sections and carefully lowered by hydraulic jacks onto a barge, which will minimize impacts to neighbors, nearby structures, fish species and water quality.

Cutting a thousand-foot-long bridge into sections is not straightforward. Subcontractor Staton Companies began the demolition process by cutting and removing the concrete deck, railings and sidewalk from the old bridge, leaving the green steel skeleton of the truss spans sitting on steel supports. About 2,300 tons (4.6 million pounds) of concrete was removed and recycled as fill material for construction projects.

Strengthening steel was then added to the temporary piers and truss section to counter the forces applied during lowering. Long steel tie-downs were attached to the stub ends of the truss spans to hold the sections in place after the center sections were cut and lowered.

Finally, the cutting began. Workers used oxy-acetylene torches to cut the steel truss span free at each end. The truss span is 28 feet high, so cutting each span section free took at least one day.

The spans were then lowered 50 or 60 feet onto the decks of the barges. The team started lowering each span around dawn and completed the process by evening. Each section weighed between 400,000 and 500,000 pounds and had to be lowered perfectly in unison onto the barge.

Each span was then cut into two or three sections to fit on  separate barges and taken ten miles north to the Schnitzer Steel facility, where they were processed for recycling.

The in-water work period begins in July. After the truss spans and steel supports are removed, a marine subcontractor will begin removing the 80 steel piles that supported the temporary bridge. By this fall, there will be no remaining sign of the old bridge. The new Sellwood Bridge will have the view all to itself.