(Sept. 30, 2016) – The annual evacuation exercise for the Portland Aerial Tram is set for Sunday morning, Oct. 2. The exercise will begin at 9 a.m. and should be concluded by noon. News media seeking access will need to follow the instructions below and contact OHSU by 8:30 a.m. on Sunday.

Members of the Portland Fire & Rescue Technical Rescue Team will lead the exercise. They will be assisted by representatives from both the City of Portland, whose Bureau of Transportation owns the tram, and Oregon Health & Science University, which operates the tram in conjunction with Doppelmayr USA.

Using ropes and harnesses, the team will lower four Doppelmayr employees playing the role of passengers 100 feet to the top floor of the OHSU Casey Eye Institute’s parking garage.

The training allows crews to practice an aerial rescue in the event the tram is stopped for an extended period of time with passengers on board. If members of the public contact you with questions about the training, please inform them that this is a scheduled training exercise and not a real emergency. 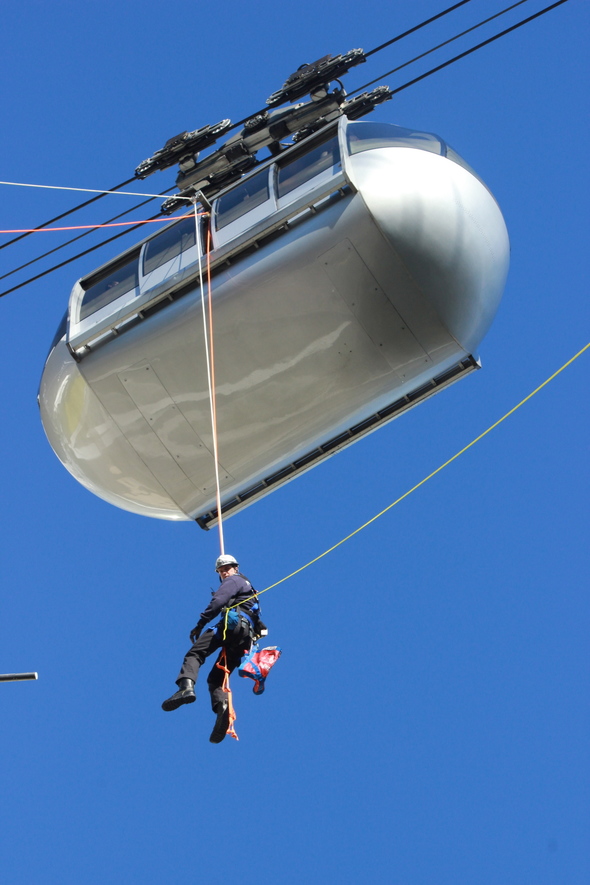 The exercise has been conducted annually since the Portland Aerial Tram opened on Jan. 27, 2007 and is designed to provide personnel with experience in executing a last resort safety measure.  There has never been a real emergency.

More than 7,000 daily commuters and tourists ride the Portland Aerial Tram; the tram is one of only two used for urban transit in the U.S.

The training will take place above the OHSU Casey Eye Institute parking garage. At that location a small number of exercise participants will be evacuated from the tram and lowered via ropes and harnesses down to the top of the parking structure. Local news crews are welcome to cover the training but arrangements must be made before 8:30 a.m. on Oct. 2. To arrange access, contact the OHSU operator, 503-494-8311, and ask for the on-call media coordinator.

The Portland Aerial Tram is closed on Sundays during the fall and winter. As a result, the training exercise will not interfere with regular operations. For those interested in observing, please do so from nearby locations and refrain from entering the Casey Eye Institute parking lot.