This year has been as unpredictable as 2016! Sunday Parkways has had the amazing opportunity to partner with many amazing people from across the region. Here are a few highlights from this year: 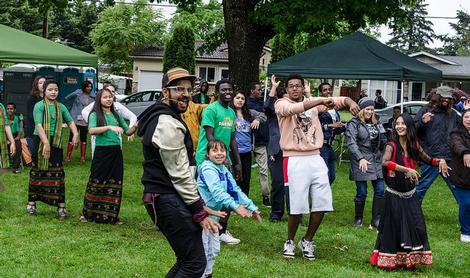 East highlights – Our first Sunday Parkways event of the year kicked off in rain. Cloudy skies and diamond sized tears didn’t keep participants away, especially the Parks for New Portlanders program which held its first Cultural Celebration at Sunday Parkways this year. The celebration attended by the Mayor Charles Hales and Mrs. Hales, provided an opportunity to bring the New Portlander community together and show the government’s commitment to diversity, inclusiveness, and the celebration of cultures here in Portland. As a portion of the route traveled down the Spring Corridor, Sunday Parkways reached out to several Homeless advocacy organizations to set up along the route to offer education on homelessness in Portland, as well as partner with Sunday Parkways in the best way to notify houseless residents on the route about the event. This event also included activities at the Foster Flood Plain marketplace from the Bureau of Environmental Services.

North highlights – The love for Sunday Parkways North continues with its yet unbroken record as the most attended of the events. The 9.5-mile loop provided attendees with the opportunity to bike freely across the Willamette Bluff or to weave in and out of Peninsula, Arbor Lodge, McCoy, and Kenton Parks to play with the circus, dance Zumba, or grab a yummy dish or two. The Community Cycling Center partnered with us this year to not only hold the CCC Bike Hub in the New Columbia area open during the event, which provided free bike wrenching series for the event, in addition to providing these services to the broader New Columbia community on an annual basis. Additionally, Sunday Parkways teamed up with local African American leaders from the Portland Bureau of Transportation and Community Cycling Center to organize its first Black (African American) Family ride which brought out 50+ participants.

Northeast highlights – The slightly cloudy day still managed to bring out 22,250 smiling faces for the July 24th event.  This event presented the first 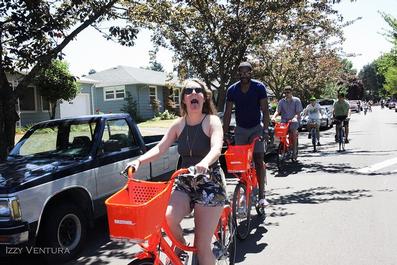 Sunday Parkways where BIKETOWN Came online! Sunday Parkways participants received a discount to try out the bikes during the hours of the event. Bi-lingual bike safety was a focus due to an ongoing partnership with Andando en Bicicletas en Cully, also known as the ABC group. The ABC Group offered a bi-lingual bike and safety fair at Khunamokwst Park.  Additionally, the Bureau of Planning and Sustainability partnered with Sunday Parkways for the North event to highlight a series of sustainable spots across the city, which included: Heart of Woodlawn (NE Dekum & Durham)

Southeast highlights – The August Sunday Parkways was coupled with the first International Open Streets Summit held in Portland. The summit which provided a forum for Open Streets advocates from across the globe to exchange ideas and experiences was attended by over two hundred participants, some of whom came out to join the August event. In the words of one of the International Open Street Summit speakers, Sunday Parkways and Open Streets in general: “… gets residents outside and engaged in physical activity and fun social gatherings. In the U.S. and Canada, most Open Streets seek to encourage people to incorporate physical activity into everyday mobility.” 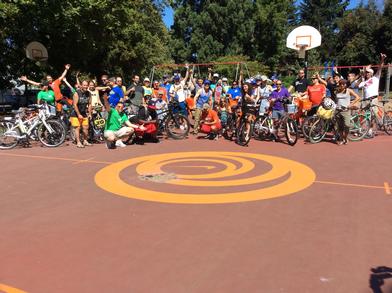 Sellwood/Milwaukie highlights – The first two City Sunday Parkways event went off without a hitch or at least very few! The City of Milwaukie worked with the Sunday Parkways team to co-coordinate the last event of the year which included traveling down through sellwood, over the newly renovated Sellwood Bridge, and into the heart of Milwaukie. This last event of the year also saw the continued partnership of Sunday Parkways with the Parks & Recreation, Bureau of Environmental Services and Native American Community Advisory Council’s Salmon Celebration at Westmoreland Park for the second year. This Celebration represents a very successful collaboration between several city bureaus, non-profits, and other agencies as well as Native American groups.

Overall it’s been a grand and wonderful year. Thank you all for keeping us rolling and helping us to bring more happiness, health and community to Portland. See you in 2017!!

Keep in touch throughout the year to check for updates and news about Sunday Parkways and Active Transportation. Check us out on Twitter and Facebook!