The Portland Bureau of Transportation uses crash data to help understand how and where people are hurt or killed while traveling on Portland streets.

This page describes which crashes are captured in the crash record, how crash information is collected, and what Vision Zero is doing related to crash data.

There are two key points: (1) most crash data relies on self-reported information, and (2) not all traffic deaths are included in the official record.

Which crashes get captured in crash data?

Property damage only: crash reports required if the crash involves a motor vehicle and damage is at least $2,500.

Injuries or deaths: crash reports required for all crashes involving a motor vehicle that result in injuries (no matter how minor) or in death.

In accordance with criteria from the National Highway Traffic Safety Administration and the American National Standards Institute (also followed by the Oregon Department of Transportation), crash data excludes people who die:

There are typically between 10,000 and 12,000 reported crashes in Portland each year. The Oregon Department of Transportation compiles information about these crashes to create the state’s official crash record.

ODOT releases the complete official crash record 12 to 16 months after the end of the year reported. For example, 2016 crash data was made available in May of 2018. 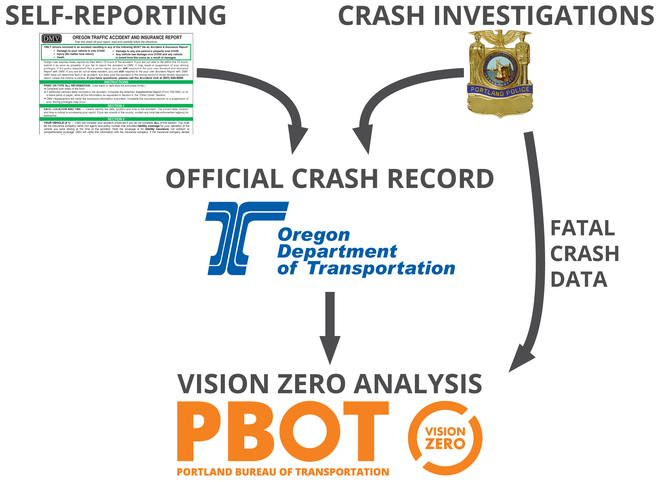 For deadly crash data, PBOT uses information provided directly by the Portland Police Bureau. This allows for the most up-to-date information about traffic deaths.

For national comparisons, PBOT uses data from the Federal Highway Administration. The FHWA compiles records from official crash records from around the nation. The national record has a longer lag between the end of the reported year and when data is available.

Self-reported crashes are the sole source of information for most crashes in the official record.

In Oregon, crash participants are required to submit the Oregon Accident and Insurance Report form to the DMV if the event involves direct contact with a motor vehicle and there is an injury, death, or at least $2,500 in property damage.

The Portland Police Bureau investigates only the most serious crashes:

The Portland Police Bureau's Major Crash Team conducts the most comprehensive crash investigations. Officers activate the MCT when people die or suffer injuries that are judged likely to result in death.

Note: PBOT uses ODOT’s definition of "serious injury," also called "incapacitating" or "major" injury: A non-fatal injury that prevents the injured person from walking, driving, or normally continuing the activities the person was capable of performing before the injury occurred.