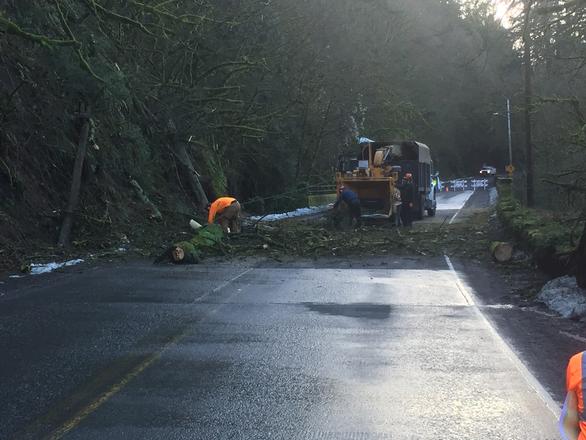 (4:35 p.m. Jan. 23, 2017) The Portland Bureau of Transportation (PBOT) advises the traveling public that NW Cornell has been reopened after crews cleared a landslide that was reported on Sunday evening between the Audubon Society of Portland and NW 30th Avenue.

PBOT engineers and maintenance crews, and tree crews from Portland Parks & Recreation worked to clear the site and make it safe.

It will take weeks for PBOT maintenance crews to clean up debris and damage to the public right of way after recent snow and ice storms and freezing temperatures. Crews are filling potholes, patching water main breaks, cleaning up landslides and rockslides, removing debris from drainage ditches and sweeping gravel from city streets. Tree crews from Parks & Recreation continue to assess hundreds of tree emergencies and clear debris after several winter storms.

VIDEO: See a video of a large tree being felled and tumbling down the NW Cornell landslide at PBOT's YouTube channel: http://www.youtube.com/watch?v=TtPA-sb_giQ 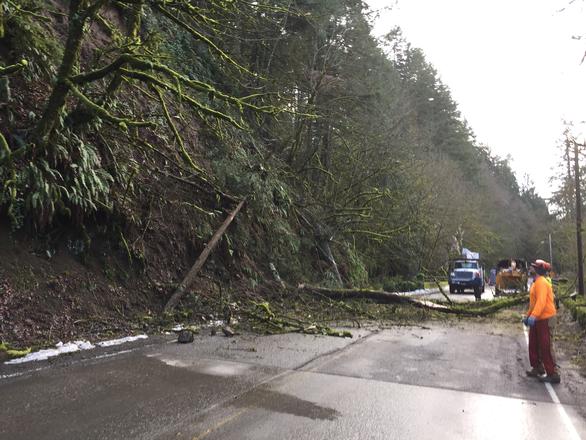 The NW Cornell landslide undercut several large trees in the area, so foresters were called in to remove those trees to prevent them from causing a safety risk for the public.

PBOT crews removed four dump truck loads of branches, dirt and rock from the area, including some debris from a smaller nearby landslide that could have caused drainage problems in rainstorms. During the street closure, PBOT crews also swept gravel that had accumulated after recent storm events.

There is no update on last week's landslide on West Burnside. That road was reopened on Friday, after it had been closed on Wednesday evening. West Burnside is open for travel with one lane in each direction, down from a normal two lanes westbound and one lane eastbound.

Report road hazards that block a travel lane or bike lane to PBOT maintenance dispatchers at 503-823-1700 or email PDXroads@portlandoregon.gov 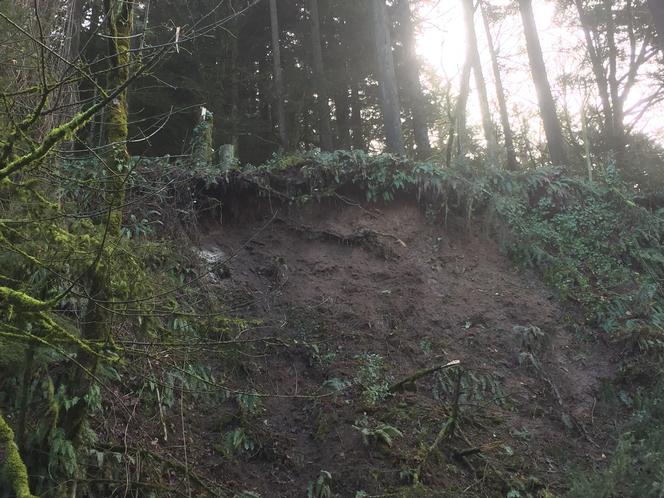 A landslide stripped a hillside next to NW Cornell Road on Sunday Jan. 22, 2016, and undercut some large trees in the area. (Photo by Portland Bureau of Transportation.)