- What is Get Portland Moving?

- Why Central City and Cully?

- How is Get Portland Moving getting Portland moving?

- How can I stay informed?

What is Get Portland Moving?

In response to a number of major infrastructure and private development projects, PBOT, together with City infrastructure bureaus and partner agencies (TriMet, Multnomah County, ODOT, and Portland Streetcar) has created Get Portland Moving. The intention of this effort, planned for January through December 2017, is to improve right-of-way coordination and community outreach in both the central city and Cully neighborhood, the areas targeted for this effort. The City of Portland and partner agencies will coordinate work in the right of way in order to minimize traffic disruptions and improve safety associated with work in the right-of-way through 2017.

The City of Portland’s infrastructure bureaus, franchise utilities, transportation agencies, private developers, and private citizens make use of the right-of-way for their work, including planned infrastructure and development projects, emergency repairs, special events, and other private uses.

Why Central City and Cully? 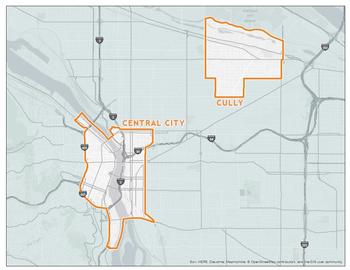 The number of projects in the central city in 2017 demands significant communication and coordination in order to keep Portlanders moving. Additionally, as the business and cultural center of the city, there is a diversity of needs and users of the ROW downtown.

The City’s work in the Cully neighborhood includes major programs and investments, such as Connected Cully, Cully Neighborhood Streets, a SmartTrips grant, and Fixing Our Streets work. Inclusion of Cully in Get Portland Moving will allow City bureaus, utilities, and transportation agencies the opportunity to improve coordination with this community, the businesses that operate here, and the freight haulers that travel common routes like NE Cornfoot and NE 82nd Avenue.

By targeting these centers of commerce, culture, and community, PBOT and their partners will improve stakeholder communication related to ROW project impacts in some of the areas most critical to maintaining access. Using these two areas as a model, the program is expected to be expanded citywide in 2018.

How is Get Portland Moving getting Portland moving?

Since Fall 2016, TriMet and PBOT have worked together to convene monthly Regional Construction Coordination Committee meetings focused on this year’s work in the central city. These meetings include the City’s infrastructure bureaus (Transportation, Environmental Services, Water, and Parks), transit agencies (TriMet and Portland Streetcar Inc), as well as other levels of government with planned work downtown (Multnomah County and ODOT). Through these discussions, several opportunities to coordinate projects across agencies have been identified; these coordination opportunities allow projects to “piggyback” on each other’s traffic controls and public outreach, reduce street openings, and minimize multiple road and transit closures.

Examples of success in cross-agency coordination include:

In addition to coordinating with external partners, PBOT is working closely with representatives from the City’s other infrastructure bureaus to plan ROW impacts and timing as part of biweekly working group meetings. These discussions have been useful in sharing potential project conflicts and identifying the project and construction managers that require continued discussion. 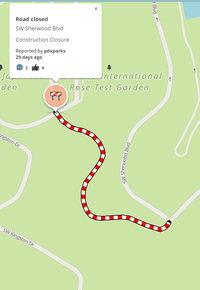 Together with our existing channels for communicating ROW impacts, including Facebook and Twitter, PBOT will be establishing a new Get Portland Moving website (MovePDX.net), that will include a dynamic web map depicting street closures in real time.PBOT has also announced a new partnership with Waze, the community based traffic and navigation app owned by Google. Through this app, PBOT will be able to communicate road closures to Portlanders using an app that many smart phone users already have; Waze will use this information to route travelers around impacted streets or areas with high congestion. As a result of this partnership with Waze, PBOT will also receive crowdsourced map data from nearly 175,000 Waze users per month, including road condition reports (such as locating potholes), issues of concern (like debris on the roadway), and traffic speeds and congestion information. PBOT will also be working closely with Waze to address some of the bureau’s safety priorities, including Safe Routes to School and Vision Zero. Stay tuned for more information on this partnership.

How can I stay informed?

- Visit MovePDX.net for current street closures in the Central City and Cully, and for bridge construction updates.

- Use Waze, the free crowdsourced traffic and navigation app, when planning your trips and look for the Wazer ID: PBOTinfo for road closure information from PBOT. Some of Waze’s real-time traffic reporting, including the PBOT’s construction related closure information, may also be available in Google Maps for mobile and desktop.

- Email MovePDX@portlandoregon.gov with questions or concerns

- Check trimet.org/alerts before you ride.

- Sign up for TriMet email or text messages alerts.