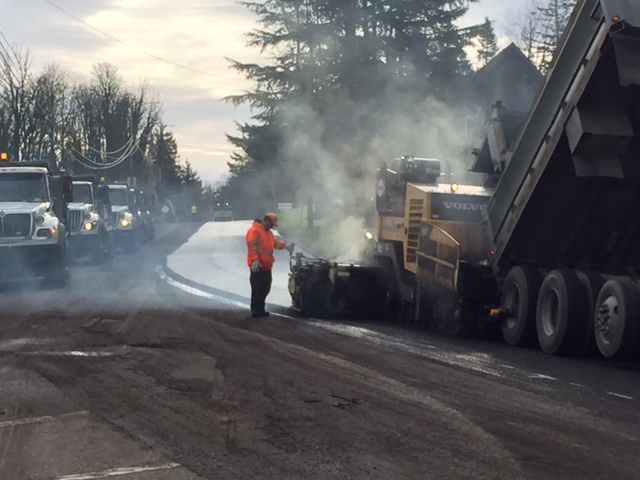 Dump trucks line up to bring asphalt to West Burnside, where PBOT crews repaved the roadway on Thursday March 23, 2017, providing preventive maintenance that could last as long as 20 years with proper maintenance. Photo by Linda Goheen, Portland Bureau of Transportation.

(9:15 a.m., Friday, March 24, 2017) – The Portland Bureau of Transportation has reopened West Burnside Road the traveling public earlier than expected, after the largest landslide of the season led to a closure March 15. The road had been expected to be reopened by 4 p.m. today.

After removing 1,380 cubic yards of debris from the road and hillside late last week, crews kept the road closed to make repairs to broken parts of the street. They also extended the closure several days to be able to repave the street, preventing the need for more road closures in coming weeks and more costly reconstruction years later.

PBOT maintenance crews worked 14-hour days to clear the slide, and continued 12-to-14 hour shifts in rain showers this week to get the street ready for a forecast sunny day on Thursday. Dry conditions are necessary for new pavement to cure properly.

"Our crews never cease to amaze me with their dedication to the public," said Leah Treat, director of PBOT. "Many of the same people who drove snow plows for 12 hours a day this winter have continued to work extraordinary shifts to make the most of the handful of dry days we have had this spring. As we did on West Burnside, we will continue to work strategically, as long as the weather cooperates, to fill the backlog of potholes that have been frustrating Portlanders across the city."

PBOT would also like to thank Multnomah County for providing access to its disposal yard near West Burnside. That saved time, as it prevented PBOT from having to send more than 100 dump truck loads to its usual disposal site east of Interstate 205. 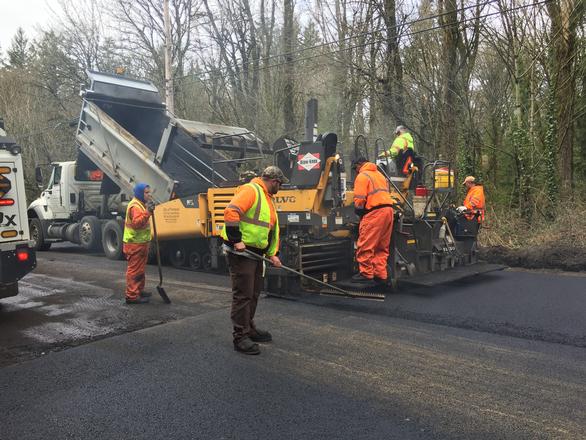 Crews placed asphalt at a rate of 45 feet per minute on Thursday, with detail work to carefully smooth out the hot material along the way and rollers following close behind. Photo by Dylan Rivera, Portland Bureau of Transportation.

Persistent rain has delayed pavement projects and pothole repairs all spring. For example, after weeks of rain delays, PBOT crews worked on Sunday March 19 to take advantage of a sunny day to start a paving project on NE 122nd Avenue, between NE Halsey and NE Stanton.

On West Burnside, PBOT crews scrambled to make the most of a sunny day on Thursday to repair sinkholes and potholes and lay new pavement on West Burnside from SW Skyline to the city limits near SW Barnes Road. Grinding and repaving a half-mile stretch of road often takes a week or more. But with overtime and additional staffing drawn from other work, PBOT was able to repave nearly two lane miles of roadway in three days. One lane mile is equivalent to one 12-foot wide lane, one mile long.

PBOT combined two paving crews and used other staff who normally do other Maintenance Operations work to help with the effort, which included:

To reopen the roadway as soon as possible, crews installed temporary lane markings. They will return with permanent striping in coming weeks when weather conditions allow.

Crews also improved drainage in areas where stormwater was not draining properly into roadside storm drains.

In addition, there were several places where the base underneath the pavement had been compromised and needed to be replaced. When roads need such base repairs, they often appear to have wavy surfaces that distract drives, collect rain and form potholes. 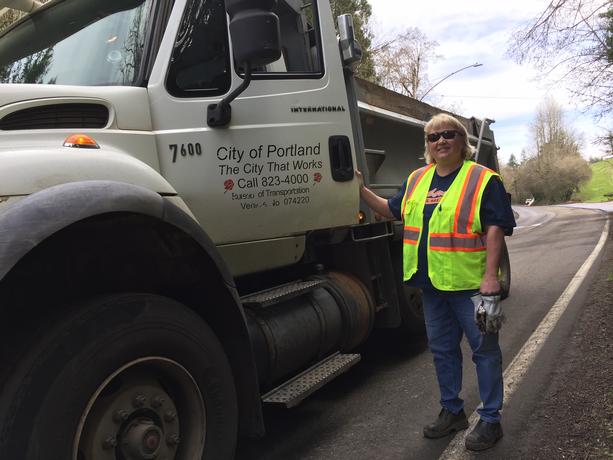 Pennie Nielsen drives a dump truck most days, and a snowplow in the recent snow storms. With 24 years at PBOT, she was one of about 40 crew members working to repair and repave West Burnside this week. Photo by Dylan Rivera, Portland Bureau of Transportation, March 23, 2017.

The City of Portland complies with all non‐discrimination, Civil Rights laws including Civil Rights Title VI and ADA Title II. To help ensure equal access to City programs, services and activities, the City of Portland will reasonably modify policies/procedures and provide auxiliary aids/services to persons with disabilities. Call 503-823-5185, TTY 503-823-6868 or Oregon Relay Service: 711 with such requests, or visit http://bit.ly/13EWaCg