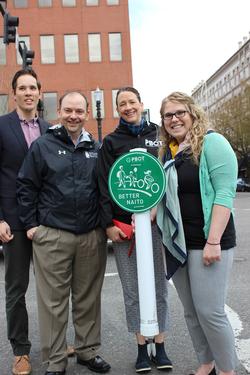 (April 27, 2017) City, community and business leaders gathered at Tom McCall Waterfront Park today to celebrate the third annual Better Naito street transformation. The project, which creates a safe space for people to travel to and along Waterfront Park during the busy summer months, will last for five months from April 28 to September 30, 2017.

After two successful summers of Better Naito run by volunteers from Better Block PDX and other community partners, City Council unanimously voted in November 2016 to make Better Naito an official City program, directing the Portland Bureau of Transportation (PBOT) to implement it, and provided funding to sustain the project for five summers.

This year, the bureau has implemented additional safety features and protections to make access to Waterfront Park safer for all users. Thanks to Fixing Our Streets funding, the bureau installed a new pedestrian signal at SW Naito Parkway and SW Main St for improved safety and updated the traffic signal at NW Naito and NW Davis St to reduce conflicts at the Steel Bridge ramp by installing a right turn signal and bike signal. The bureau also installed white plastic posts to the north of the Better Naito installation between NW Davis and NW Ironside Terrace to better delineate the existing bike lanes.

Instead of the temporary construction cones of previous years, PBOT has installed removable white plastic posts to delineate one northbound motor vehicle lane on SW Naito Parkway, converting it to open space for the public to walk and bike and roll safely to Waterfront Park’s festivals and community events. The posts are installed the entire one-mile length of Better Naito, between SW Main and NW Couch St.

“Safety for Portlanders should always be our top priority,” said Transportation Commissioner Dan Saltzman, “I thank my colleagues on City Council for their support of Better Naito, particularly Commissioner Amanda Fritz and her staff at Portland Parks & Recreation, for their support of this project. I look forward to seeing how Better Naito continues to improve access to Waterfront Park over the next five months and the next five summers.”

“It has been rewarding to watch Better Naito mature from a student-led pilot project to a seasonal fixture,” said Transportation Director Leah Treat. “Community driven projects like these are emblematic of Portland's rich history of embracing public spaces for people. Better Naito also provides a solution to mobility challenges as people flock to the westbank throughout the summer to enjoy our many festivals and beautiful riverfront. This project would not be here today without the countless hours of volunteer work by dozens of people from Better Block PDX, Rose Festival and other community events at Waterfront Park."

“As the largest of many events that use Waterfront Park, we are grateful that the City has embraced the Better Naito concept for a safer and more family friendly access to the Festival,” said Jeff Curtis, Rose Festival Chief Executive Officer. “The installation of the new crossing and bike signals, plus adding a designated loading zone are huge improvements to public safety access along Naito and help make it safer for everyone responsible for operations as well.”

“Better Block PDX is so proud to have been involved with this project and the process that it has spurred. Our goals as a group are to show what can happen when we consider designing our public spaces for people, and Better Naito does just that,” said Better Block PDX core volunteer, Gwen Shaw. “When we first put this idea out there, we didn’t know what people would think, but we’ve been able to use this amazing space as a living workshop and really experiment in ways that otherwise wouldn’t be possible. And we thank City Council and PBOT for allowing us to do that.” 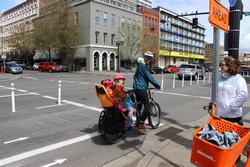 Every year the festivals in Tom McCall Waterfront Park draw hundreds of thousands of people. During the peak season between April and November an additional 15,000 more people per day visit the Waterfront. Better Naito creates a new multiuse path on the west side of Waterfront Park, providing another connection for people walking and biking between the Hawthorne and Steel bridges.

The addition of BIKETOWN to Portland’s streets last year means that people will have another way to travel to and on Better Naito this summer. Two BIKETOWN stations are conveniently located adjacent to the installation at SW Salmon and Naito and SW Naito at Ankeny Plaza. In addition, BIKETOWN users will be able to park within many of the festivals at Waterfront Park this summer, including Portland Rose Festival CityFair, Pride NW, the Waterfront Blues Festival and Oregon Brewer’s Fest.

Loading and unloading of passengers and freight will be managed by PBOT and enforced by the Parking Enforcement division. The bureau has designated a passenger drop off and pick up zone on the north side of SW Taylor, closest to SW Naito. PBOT’s Parking Enforcement officers will be citing vehicles stopped in Better Naito without loading permits.

The Better Naito project was first piloted in 2015 to help manage this influx of visitors, create a safe space for people to travel to these events, and to reduce conflicts between people walking and biking and driving along the Waterfront in the summer months. The first Better Naito was a 2-week pilot project developed by Better Block PDX, Portland State University, and a host of community partners. Prior to Better Naito, people were often forced to walk in the bike lane, squeeze into narrow dirt paths, or bike in a travel lane with motor vehicles to reach Waterfront events. The volunteer-led effort championed by the non-profit Better Block PDX improved the Waterfront Park experience during its busiest season and was implemented again in the summer of 2016.

Feedback is welcomed via email at NaitoParkway@PortlandOregon.gov. You can also leave a voice message at 503-823-4321. The public is encouraged to share their feedback on social media with the hashtag #BetterNaito.