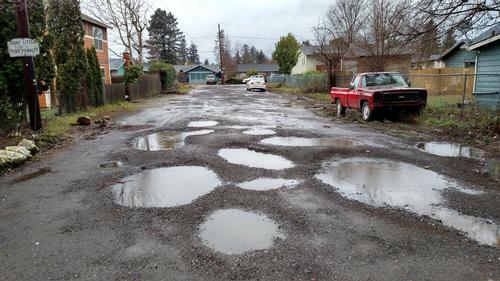 Above: SE Morrison between SE 154th & SE 155th. The EPAEE project intends to pave this street as part of 150s Bikeway improvements. Photo by Steve Szigethy, Portland Bureau of Transportation.

East Portland Access to Employment & Education is a transportation project that will provide workers and families of all incomes lower cost access to jobs, businesses and education opportunities by building and improving sidewalks, street crossings, bus stops, bikeway facilities and other safety improvements in East Portland. 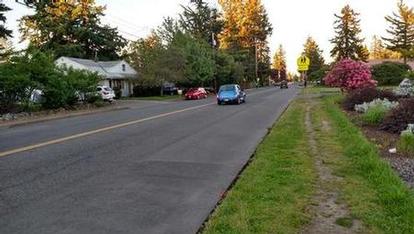 The project consists of the following elements: 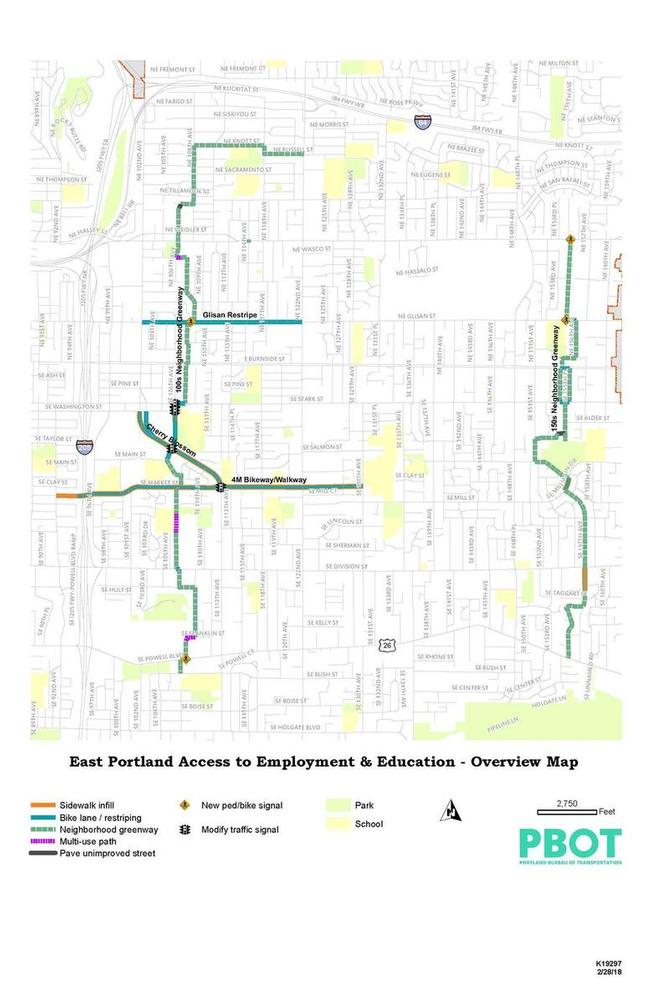 Much of east Portland developed in the mid-20th century when transportation infrastructure and land use patterns were oriented toward the automobile. As a result, many streets lack sidewalks, bicycle facilities and safe crossings; street connectivity is poor; and most major streets have five lanes and traffic speeds of 35 to 50 mph. Serious injury and crash records collected over the last ten years indicate a person is more likely to be killed walking, biking and driving in east Portland than in any other part of Portland.

At the same time, east Portland has experienced significant infill development and has attracted many families and individuals with lower incomes, including people that do not have access or cannot afford to use an automobile. Investments in pedestrian, bicycle and transit infrastructure are needed to help people of all income levels reach destinations, particularly education and employment sites that provide “ladders of opportunity” for people to improve their economic prospects.

In 2012, Portland City Council adopted East Portland in Motion, a five-year implementation strategy for active transportation projects east of 82nd Avenue. Developed in partnership with the diverse neighborhoods and organizations of east Portland, the strategy identified over $80 million in walking, biking and transit access projects to pursue with existing and future funding. With East Portland in Motion as a guide, PBOT has continued to seek federal, state and local funding to implement the projects recommended in the strategy.

In 2013, as part of Metro regional government’s recurring allocation of federal transportation dollars, $33.8 million in unanticipated additional funding became available for the Portland region to invest in transportation projects in the 2016-2018 time frame. The Joint Policy Advisory Committee on Transportation, consisting of local elected officials, decided to brand these extra funds as a “Regional Economic Opportunity Fund” and worked with city and county staff to identify five transportation projects that would spur economic development throughout the region.

The City of Portland decided to invest its share of the Regional Economic Opportunity Fund in the continued implementation of East Portland in Motion. PBOT staff put together the $8.3 million proposal for East Portland Access to Employment & Education, consisting of sidewalk infill, neighborhood greenways, bike lanes and crosswalks that had been identified in East Portland in Motion and prioritized by community leaders, but not yet funded. $3 million of the funds were dedicated to pedestrian/bicycle improvements on SE Powell Boulevard, and that money was transferred to the Oregon Department of Transportation (ODOT) through an intergovernmental agreement.

The remaining $5 million, plus a local match, resulted in a total project budget of $5,869,831. Portland City Council accepted the federal grant from ODOT in September 2016.

Design is anticipated to be complete in the fall of 2019, with construction taking place in fall 2020-summer 2021.

PBOT staff have been visiting the affected neighborhood associations and will be contacting property owners and residents directly affected by the project. Feel free to contact the project manager with any questions, concerns or ideas related to the project: