(Aug. 24, 2017) –  City Commissioner Dan Saltzman and Transportation Director Leah Treat joined community groups today to celebrate the completion of the 20s Bikeway, a 9-mile corridor of streets that are optimized for bicycle and pedestrian safety.

One of the largest on-street corridors for biking and walking in the United States, and a rare north-south route in Portland, the 20s literally spans the city. It runs from NE Lombard Street near the northern city limits to SE Crystal Springs Blvd, near the southern city limits.

The corridor is designed to meet the needs of novice and advanced cyclists. Two-thirds of the 9 mile route is comprised of neighborhood greenways, the network of residential streets with low traffic volumes and low speeds, where bicycles and pedestrians are given priority.

"The 20s Bikeway makes this North-South corridor and its intersections safer and more convenient for thousands of Portlanders to get where they're going by bike, on foot, or with a mobility device," said Saltzman, who oversees the Portland Bureau of Transportation. "When we make our city safer for people using these modes, we make it safer for everyone. I invite all Portlanders to try out the section of the 20s Bikeway closest to your home, business or school."

VIDEO: See Before & After images of some major safety improvements built for the 20s Bikeway -- making it safer for everyone to walk or bike 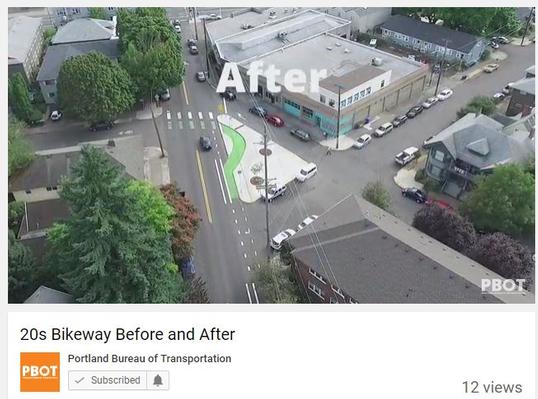 "Before & After" photographs are available for public use at PBOT's Flickr page.

With the 20s Bikeway project, Portland now has 371 miles of bikeways, including neighborhood greenways, off-street paths and a variety of bike lanes.

"The 20s Bikeway is a world class route," said Treat, director of PBOT. "Projects like the 20s Bikeway are essential for us to meet our climate change goals, improve public health and our economy. This project is opening at the perfect time, with school starting back up in the coming weeks across Portland. The neighborhood greenways on this new route are places where families can feel comfortable riding bicycles for exercise, shopping and commuting to school. This amazing new bikeway will introduce thousands of people to the joys of cycling."

Take a guided tour of the 20s Bikeway this Tuesday Aug. 29! 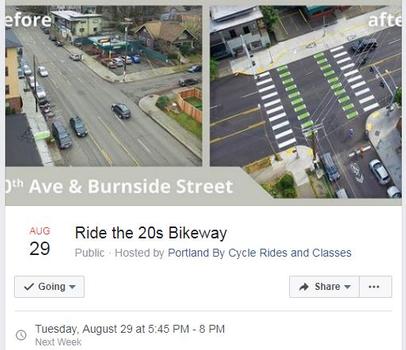 See the Facebook page for Portland By Cycle Rides & Classes - and bring your helmet!

Jay Harris, Chairman of the Kerns Neighborhood Association, said many residents and business owners have been calling for a safer, more comfortable north-south bike and pedestrian route in the area.

"The Kerns Neighborhood Association is very excited about these new developments promoting safety and ease of transport for all levels of bike riders," Harris said. "We have been eagerly awaiting a more viable north-south bike route. This bikeway has been one of our top priorities, and promises to prove its worth from day one."

Christian Ettinger, brewmaster and founder of Hopworks Urban Brewery (HUB), said his employees and customers at the Southeast Powell location feel more comfortable crossing the busy street at SE 28th Avenue since a new traffic signal was installed as part of the 20s Bikeway.

"Our employees and guests love biking to our restaurants," Ettinger said. "As a sustainably-focused, local Portland brewery with three locations in the metro area, we have seen firsthand how safer bike routes are good for business. Portlanders love bicycling and we can't wait to see people using the 20s Bikeway to safely reach our restaurant and other great businesses south of Powell."

20s Bikeway 'By the Numbers'

A 9-mile route that spans nearly all of Portland in the north-south direction, the 20s Bikeway touches tens of thousands of people, and provides easy biking and walking access to a wide variety of community destinations: