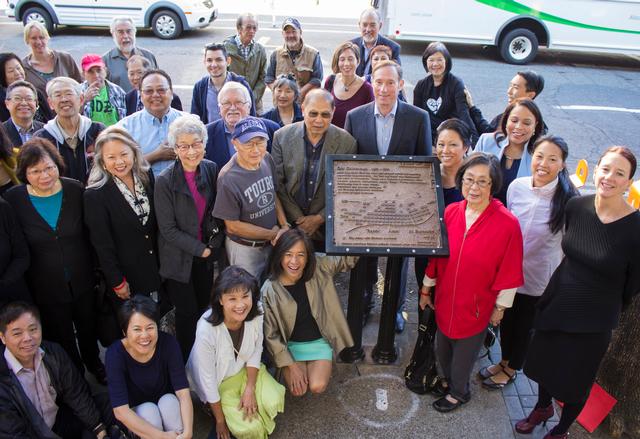 Between 1863 and 1900, there were over 5,000 Chinese living, working and doing business on SW 2nd Avenue between Taylor and Burnside, the City's original Chinatown. The plaque, designed by urban designer Suenn Ho, recognizes the contributions of these early settlers and memorializes their history for future generations.

"The Chinese American community has a long and storied history in Portland," said Commissioner Dan Saltzman. "The plaque commemorates this rich history and we deeply appreciate this gift to Portland." 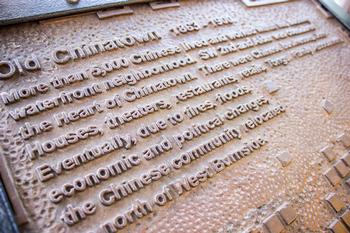 “Our streets are one of our largest public spaces. At PBOT, we want these spaces to enhance our neighborhoods and serve our communities,” said PBOT Director Leah Treat. “So we were very happy to support this project. The plaque is a beautiful way to mark the significant contributions of past generations of Chinese Americans to our city and preserve this rich history for Portlanders and visitors alike.”

“I would like to quote Alan Spears of National Park Conservation Association who said, ‘The absence of our people in the historical landscape of our country is in itself a civil rights matter,’ said Helen Ying, Portland Lodge Board Director and Old Town Chinatown Community Association Chair.  “We are simply elated to gift the bronze plaque to the City and mark the history and contributions of the Chinese American community to Portland."  Betty Jean Lee, Portland Lodge Board Director, added, "It has taken over a century to finally have the first Chinese community in Oregon documented. Now we can share it with the whole world.”

The plaque was installed by PBOT Maintenance and Operations personnel and can be seen on the corner of SW 2nd Avenue and Pine Street.