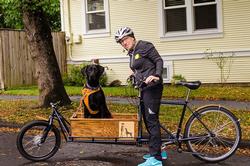 As the second “Sellwaukie” Sunday Parkways event on September 24th draws near, it’s bittersweet – we in Milwaukie have learned SO much from the Portland Sunday Parkways team the past two years, but are not quite sure two years was enough time to learn all the ropes!  Next year, Portland moves on from Sellwood to the new Green Loop route, and we in Milwaukie will be doing our own, as-yet-unnamed, open streets event.

Various folks in Milwaukie have talked about wanting to do a Sunday Parkways-type event for several years, but it always seemed too daunting a task, and no one was ever ready to step forward and take the lead.  Then one night I met Greg Raisman of PBOT over a card table, and mentioned that interest.  That eventually led to a meeting between Parkways Impresario [Grand Poobah?  Mastermind?] Linda Ginenthal and some Milwaukie cycling advocates, and then morphed into the great city-to-city collaboration we have today.  We all really appreciate the willingness of Linda and her crew to share all the lessons they’ve learned over a decade of building Sunday Parkways into the beloved institution it is today.

The Sellwood-Milwaukie event last year was great fun, and I’ve heard from lots of Milwaukians who can’t wait for round two – especially now that the 17th 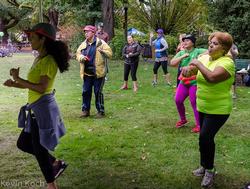 Avenue multi-use path is open.  In Portland, Parkways is all about using greenways and other neighborhood streets.  Using our future Monroe Street Greenway was an important part of Milwaukie-Sellwood route, too – but running the route past the bustling Milwaukie Farmers Market and down Main Street is something unique in the Portland Sunday Parkways world.  One of my great memories from last year was watching Love Bomb Go-Go Marching Band come down off the stage in front of Milwaukie City Hall and march through the Farmers Market – not something you see everyday!

I always describe Sunday Parkways as a rolling block party.  I love the way of thinking that underpins open streets events, which are gaining momentum across the US and around the world.  As Greg puts it: “Cities are for people. Our cities were built that way. Prior to the adoption of motor vehicles, streets were bustling public spaces. Today, Sunday Parkways reopens our streets to people. The event strengthens the commons and frees people of all ages and abilities to explore and share their neighborhoods in a whole new way.”

That community recapturing of the streets was evident last year from the wide range of ages of participants -- from kids in bike trailers or on training wheels to elderly and alternately-abled riders, Parkways is a mellow event for riders of all skill levels.  And I’m told that we had the largest percentage ever of walkers on our Parkways route last year – and don’t think of this just as a bike event, you can walk, rollerblade, skateboard, etc,  Some motorized wheelchairs and scooters are always seen out and about, too. 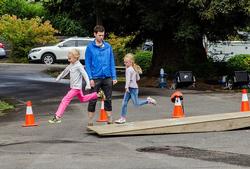 This year will be even bigger, with more kids’ activities both on Main Street and at Water Tower Park – including the charming, oh-so-Portland minigolf course and the “Kidical Mass” bike skills course.  We’ll also have the Milwaukie Police Department joining us at Water Tower Park, live music at both locations, fabulous food and great vendors like IKEA and AAA Oregon.  Oh yes, and although I’m focusing on the Milwaukie half of the route, there’s the return of the amazing Salmon Celebration at Westmoreland Park, in partnership with the Native American Community Advisory Council, as well as zumba classes, disc golf, and vendors including AARP and BIKETOWN. See the full brochure here.

It’s kinda sad to realize that the Sellwaukie event will be no more after September 24th.  But in its place, you have two cool new routes and events to watch for in 2018.  From all of us in Milwaukie, thanks so much to PBOT, it’s been a great ride!