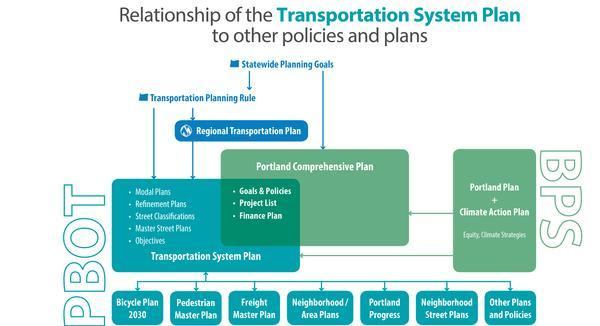 What is a Transportation System Plan?

Why do we need a Transportation System Plan?

Strategies and regulations for implementation 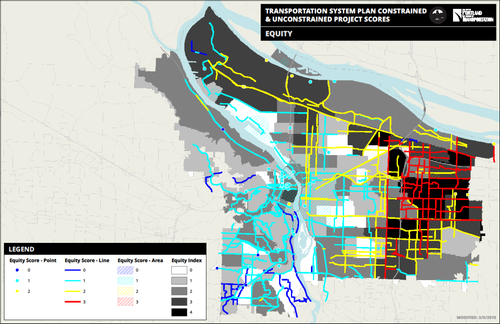 • It was unclear to what extent criteria were used to derive project lists;

• Criteria were often not outcome-based;

• It did not adequately inform staff of potential priority projects for grant applications; there was no clear project development “pipeline;”

• Projects did not necessarily align with state, regional and local policy priorities;

• Small projects were not competitive for grant applications and often languished for years or decades;

• There was not a clear link between TSP and Capital Improvement Plan (CIP) projects and programs.

To develop evaluation criteria that would address these issues, in late 2013 and early 2014 Bureau staff reviewed state, regional and local rules and plans to determine which outcomes appeared in multiple plans.  Staff identified seven consistent outcomes, vetted the seven outcomes with the Transportation Expert Group, then developed a set of draft project/program evaluation criteria consistent with the criteria.

The resulting eleven evaluation criteria reflect the seven outcomes.  They include four economic benefit criteria, two freight-specific criteria, one public support/opposition criterion and one criterion for each of the other six outcomes.

Due to staff time constraints, the evaluation scoring process was limited to City of Portland projects on the Candidate list of major projects. While it would be beneficial in the future to evaluate major projects led by other agencies, it was a lower priority because other agency projects are likely to be fully or substantially funded through sources outside the City of Portland revenue forecast.

Preliminary scoring of projects for the equity criterion was completed using demographic data compiled by BPS to support the 2012 Vulnerability Analysis.

Through the Enhanced BPS Vulnerability Risk Factors analysis, each census tract in the City was assigned a score from 0 to 6 based on whether the population of that tract met a threshold set for each of six displacement risk factors. Of these six factors, four were used to rank projects on the equity criterion: Communities of color (> 27.4% of the population); Households at or below 80% median family income (MFI) (> 43.7% of the population); Population age 17 and under (> 19.2% of the population); Population age 65 and over (> 10.5% of the population). The scores for the four vulnerability factors were totaled for each census tract and the dataset was converted to a raster with 50 ft2 cells with potential values between 0 and 4. The scores of the 50 ft2 cells within ¼ mile of each project were averaged and then classified using the quantiles method to determine a score between 0 and 3 for each project.

1. Calculated the total of the four risk factors (Communities of color; Households at or below 80% of MFI; Population age 17 and under; Population age 65 and over) for each census tract.

2. Rasterized the tract dataset (50 ft2 grid cells) with the cell value equal to the sum of the four risk factors.

3. Found the mean score of the cells within a ¼ mile buffer around each project.

4. Classified the raw equity scores for the projects in 4 quantiles, assigning scores of 0 to 3 (0 to the lowest mean scores; 3 for the highest mean scores).

Preliminary Equity scores were manually post-processed to account for projects in areas with little or no housing. For example, scores for some projects in lightly-populated industrial areas were lowered because the equity benefit would be relatively low despite the automated method producing a high score. However, these projects still received some points to reflect the value of industrial jobs for many of the vulnerable populations referenced above.