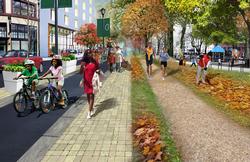 Portland families deserve safe streets on which to walk, bike, operate mobility devices, access transit and drive. And Portland families deserve beautiful parks and trails to exercise, be in nature and have fun.  The Green Loop, a bold new concept of the Central City 2035 plan, envisions a linear park that connects people to places within and beyond Portland's downtown neighborhoods and to the Willamette River. Think of the Eastbank Esplanade, Waterfront Park, Hawthorne, and Steele Bridges as a central River Loop. The Green Loop will be a 6-mile concentric circle around the River Loop that utilizes the Broadway Bridge and Tilikum Crossing.

With safer and more enjoyable routes for walking, jogging, rolling, cycling and resting; it's a 10K run, a gentle ride or stroll, both recreation and respite.  Welcoming all ages and abilities; everyone has a place in the heart of the city.  More trees mean fresher air and more shade on hot days.  It will be designed for safety, welcoming kids on bikes and elders alike. It’s like Sunday Parkways every day.

Healthy cities need healthy hearts, and the Green Loop will help support our Central City as it welcomes 30 percent of Portland’s growth over the next two

decades. As Portland’s population grows, our roads and freeways will carry even more traffic. We need reliable and safe ways to move people in and out of the urban core. The Loop builds a healthy web of connectivity between nearly a dozen districts – from the West End to the Lloyd to South Waterfront -- and countless cultural hot spots like the Portland Art Museum, OMSI and the Moda center. It links to major transit hubs and it’s the central path of a citywide system of park-like greenways reaching all neighborhoods of Portland.

Equity is a core element of the Green Loop. The Central City is home to 60 percent of the City’s affordable housing units, and it has the largest concentration of social services and care providers in the city, especially shelter service facilities.  The Green Loop is just one project the City is undertaking to make recreation and active transportation safe and convenient across Portland   East Portland, in particular, is a focus for major investment. In tandem with the Green Loop, the City is supporting community efforts to create a Lents Green Ring. The Lents Green Ring will be a model for neighborhood level loops in other underserved neighborhoods in Portland.