Or, Getting a Green Light on a Bicycle at an Intersection

How it’s done at signalized intersections In the city of Portland we use inductive loops (wires in the road) to detect traffic at signalized intersections whenever a traffic signal has been designed to respond to the presence of vehicles. At a few locations we use video cameras, like on the west end of the Broadway Bridge to detect westbound traffic and at N.E. 102nd and Fremont for eastbound traffic. However, we use inductive loops to detect traffic at most traffic-actuated signals.

A vehicle is detected when it passes over the inductive loop and the metal in the vehicle causes a change in the magnetic field. The inductive loop is usually a six-foot diameter circle cut in the road (usually 1.5 inches deep). These loops can also be in the shape of a diamond but in most places circular loops are more economical to install. The wire between the loop and the controller cabinet is wound around itself to cancel false detection outside the desired detection zone.

There are a few locations where the loop is in the shape of a fifty-foot rectangle with wires also in the middle of the rectangle. These are called quadrapole loops and are usually in left turn pockets. For economical reasons, when a quadrapole loop is replaced due to failure or road construction, we prefer to install four circle loops placed twelve feet center to center to achieve the same detection zone.

How we mark for bicycle detection

Whenever we receive a request to mark an approach for bicycle detection, our electricians use a bicycle to test the loops. Once we verify a location where a loop consistently detects a bicycle, we paint the spot with a temporary white mark in the shape of two small arrows facing each other (see Figure 3). Then we notify the good folks in the Pavement Markings Section and they put down a permanent mark with hot plastic in the shape of a small bicycle (Figure 2) similar to the bike lane mark (Figure 1) only much smaller. There are some locations where the sensitivity of the loop has deteriorated and is unable sense a bicycle. We replace those loops as time and budget permit.

When using the bicycle detection mark to get a green light there are some things to keep in mind. The detection does not lock in a call at most traffic signals. Therefore, you must stay on the mark because as soon as you leave the mark the traffic signal controller will drop your call for a green light and it may take another cycle before you get served. There are only a few exceptions to this and they are usually for a back loop, not at the stop bar or crosswalk. Also keep in mind that some traffic signals have very long cycle lengths and it may take a while to get served on a side street. Cycle lengths may be as long as one hundred and twenty seconds and although two minutes may not sound like a long time, it may seem like an eternity when waiting for a green, especially if you are impatient like me. Some signal indications are recalled every cycle and of course the loops are not marked in these instances. For example, if a crossing has pedestrian signals with no push buttons, then that green indication would be recalled every cycle. 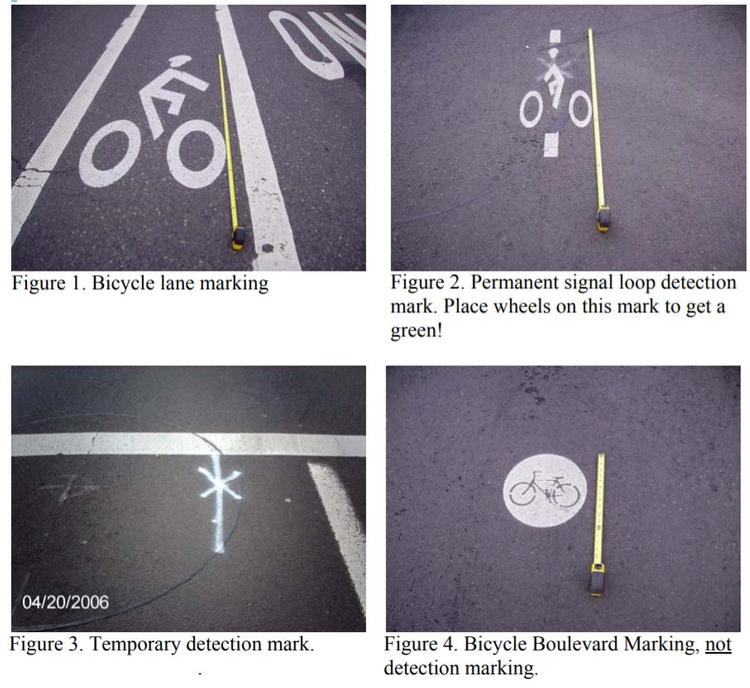