Since 1987, North Willamette Boulevard has been part of community conversations to improve the streetscape for people walking, bicycling, and access transit. Because of the deteriorating condition of the surface, PBOT is currently repaving the portion of N Willamette Blvd from N Rosa Parks to N Woolsey. During repaving projects, PBOT looks to improve the traffic operations of the street to meet updated City and community standards. These opportunities to make changes come at little or no cost to the City because the street is undergoing paving improvements and the striping is removed during the process.

To improve the safety, accessibility, and comfort for people walking, taking transit and bicycling, PBOT will be re-striping N Willamette Blvd to include a shoulder area on the south (bluff) side of the street for transit access and pedestrian space (see image, below). The re-striping plan will also add a buffer area to the bike lanes on either side of the street. The additional space required for re-striping the street will require removing automobile parking on N Willamette from N Rosa Parks Way to N Woolsey Ave (see project map, below). Access to driveways, parking lots, and on-street parking on adjacent side streets will not be impacted by the changes. These changes are expected to occur after November 10th, 2017.

Funding
The project is funded as part of a City Council-approved Major Maintenance Set-Aside. 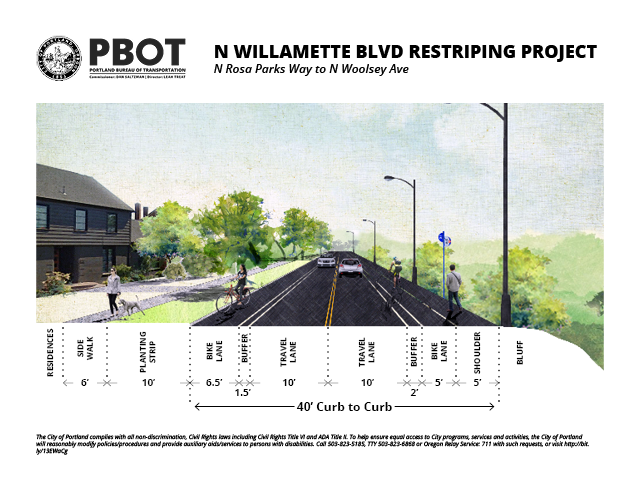 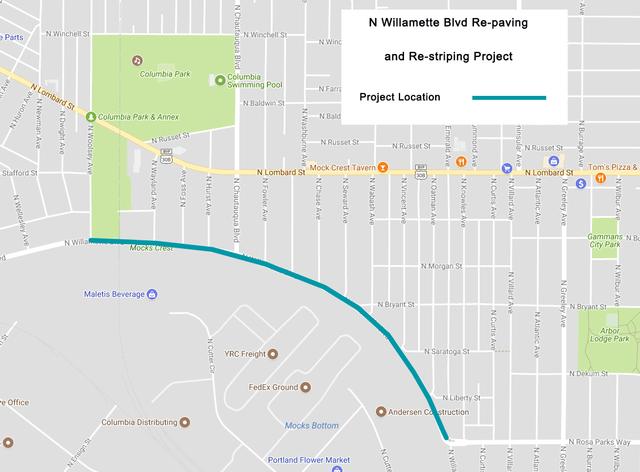 Why is PBOT undertaking this project now?
Emergency paving on N Willamette to repair the deteriorating surface offered an immediate opportunity to review existing operations and safety of the street.

Have changes to N Willamette Blvd been discussed with the community?
Yes, PBOT directly notified all impacted residents along the street as well as adjacent neighborhood associations. In addition, PBOT and the community have been working on changing how N Willamette Blvd operates since at least 1987 and most recently went through an extensive community conversation in 2011.

Is there a safety issue on N Willamette Blvd?
Yes, there are a number of safety concerns. There have been six crashes involving a bicycle and a car in the last seven years, with one crash resulting in an incapacitating injury (see the crash report here). Additionally, there are no places for people to safely access eastbound bus stops.

What are the project's benefits?
The project will make it safer and more comfortable for people to bike, walk, and access transit on a crucial corridor in North Portland. The design includes a buffer between people biking, walking or waiting for transit and moving vehicles, increasing safety. It provides a five foot shoulder for people waiting for the bus on the bluff-side. It will also provide wider more comfortable bike facilities that will better serve existing bike commuters and hopefully attract a broader cross section of Portlanders to cycling.

Are there specific City policies that support this project?
A number of City policies and policy documents call for increasing the number of people who walk, bicycle, and take transit in the city, specifically the Climate Action Plan, Portland Plan, and Transportation System Plan (TSP). The TSP also designates N Willamette Blvd as a "Major City Bikeway" which requires building the highest quality bicycling facilities and specifically allows for removing motor vehicle lanes and on-street parking to provide needed width for bicycle lanes on busy streets.

Where should people park there cars now?
Our studies show that parking utilization on N Willamette in this section is very low. There is available parking space on side streets and nearly all of the properties in the project area have parking available in private driveways.

Will there be a fine for unlawfully parking on N Willamette Blvd?
Parking in a bike lane can result in an $85 fine but PBOT Parking Enforcement exercises discretion and typically issues warnings rather than fines in the weeks after changes of this nature, allowing people to learn of and adjust to the change.

Are there any plans change other sections of N Willamette Blvd?
While no plans currently exist, PBOT has an interest in working with stakeholders and community members to continue improving the conditions on N Willamette.