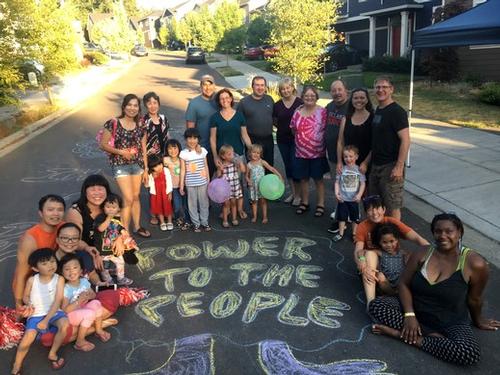 PBOT worked with the Office of Neighborhood Involvement’s Crime Prevention Specialists within the area to help identify barriers that may have contributed to low participation. This neighborhood is culturally diverse with many languages spoken and many of its residents living below Portland’s Area Median Income. PBOT undertook equity measures to make obtaining the permit accessible in the following ways: waiving the permit fee, making available free barricades within the neighborhood, creating an online application and translating supporting documents and outreach material into five of the most common languages spoken in these areas. These actions opened the door to increasing participation.

PBOT partnered with four community organizations located in the pilot area; APANO/JAMS, EPNO, Living Cully Plaza and ROSE CDC to act as barricade check-out locations. These organizations were instrumental in distributing barricades and facilitating participation to residents. We also engaged in an outreach campaign focused on one to one engagement at many community events within the area including; Sunday Parkways, APANO Night Market and Oregon Walks Lents Founders Fair.

The Pilot Project was a success. The program issued a record 555 permits citywide. There were four times as many permits in the pilot project area than in previous years! A follow up survey with the participating permittees revealed some compelling stories.

Most block party permittees were first-time applicants who had always wanted to participate in the permitting program. One survey respondent said, “Before this event, many of the people in the neighborhood had not met. The block party provided a safe, open, casual, and fun space for people to interact. Several of the attendees expressed their previous desire for this kind of thing, and everyone seemed really happy that it finally happened.”

One family in Cully had never seen or met some neighbors despite having lived on the same street for 14 years noting that they wish they could have one every month but that they would surely hold another block party next year: “more people wanted to join in for the next one, so we will definitely do it again next summer.”

Given the high level of success, PBOT hopes to expand the pilot program to other neighborhoods. Block party permits are available year-round. Please visit our website to learn more: www.pbotblockparty.com