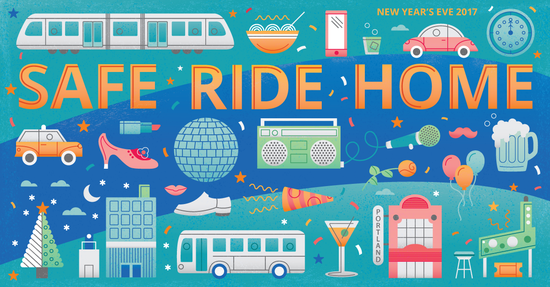 (January 9, 2018) The launch of the Portland Bureau of Transportation’s (PBOT) new program, Safe Ride Home, on New Year’s Eve was a resounding success. Over 2500 people took advantage of discounted taxi and transportation network company rides during the holiday. Thousands more chose to ride TriMet and a total of 75 intrepid revelers used BIKETOWN bike share to get to and from their parties.

Impaired driving is a major contributor to death and injury on Portland streets. More than half of deadly crashes in Portland involve people who are intoxicated. Safe Ride Home helps to achieve the City of Portland’s Vision Zero Action Plan’s goal of launching initiatives to reduce impaired driving.

"Dixie handed out hundreds of the coupons on New Year's Eve and front door staff had many conversations with customers about their options," said Dan Lenzen, a partner at Dixie Tavern in the Old Town Entertainment District.  "MANY people thanked us for providing the options. Numerous comments were made about how cool it was that the City did this and one customer, upon learning that MAX was free, became very excited and headed toward the MAX stop."

“On a night with thousands of Portlanders choosing to imbibe as they ring in the new year, I am thankful that people made the responsible choice of taking a safe ride home,” said Transportation Director Leah Treat. “The success of this program shows the value of providing affordable travel options to prevent people from driving while impaired. Over 50 percent of deadly crashes in Portland involve people who are intoxicated, but on New Year’s Eve there were none.”

PBOT’s Vision Zero and Regulatory teams are hard at work planning additional opportunities to support responsible choices during future holidays and celebrations. Keep an eye out for future Safe Ride Home events throughout theyear and learn more about the City of Portland’s Vision Zero program at www.visionzeroportland.com.