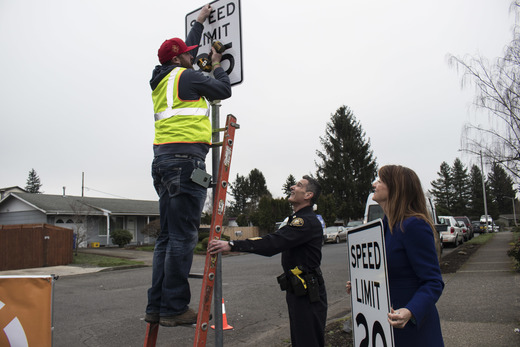 (Feb. 6, 2018) The Portland Bureau of Transportation began to implement a new 20 mph speed limit change on Tuesday, as crews posted the first of about 2,000 signs that will cover nearly 70 percent of city streets.

The speed reduction will make streets safer, and help the City achieve Vision Zero, the goal of eliminating traffic fatalities and serious injuries. In 2017, 45 people were killed in traffic crashes in Portland, nearly double the number of people killed in homicides.

"It is unacceptable for anyone to be killed by traffic violence," PBOT Director Leah Treat said. "Today we are poised to take a significant step forward in making our neighborhoods safer and more livable. Five miles an hour may not sound like much, but when it comes to reducing the severity of crashes it makes a big difference. By reducing speeds from 25 to 20, we can make it nearly two times more likely that a person will survive a crash."

The change was approved by the Portland City Council Jan. 17, after the state legislature gave the City the authority to reduce speed limits by 5 mph on residential streets.

To call attention to the change, Treat and Portland Police Bureau Captain Michael Crebs spoke at a news conference on Tuesday and helped a PBOT sign crew install the first 20 mph sign to replace a 25 mph sign. The sign is located on SE 168th Avenue, just south of SE Stark St.

The new residential speed limit takes effect citywide April 1. As signs are installed in coming weeks, people driving should follow the speed limit as it is posted on each street. The new 20 mph signs will be installed first in East Portland and then in North Portland, which have the highest rates of traffic fatalities. The residential speed limit change is just one aspect of the City's Vision Zero program, which focuses safety improvements, education and enforcement efforts on busy streets where most traffic fatalities occur.

The Vision Zero Action Plan identifies 30 streets on the High Crash Network, where safety improvements are prioritized. Roads on the list represent only 8 percent of city streets, but account for 57 percent of deadly crashes.

This year, PBOT will make safety improvements on 17 streets on the High Crash Network, including Outer Glisan, NE Halsey and outer SE Division St. PBOT's Vision Zero web site has a map of the 17 streets where improvements are planned to start construction this year.

In the coming weeks, PBOT will install speed safety cameras on NE Marine Drive. In three other corridors where cameras were installed, top-end speeding was cut by more than half.

Learn more about Portland's Vision Zero Program, the effort by the City and regional partners to end traffic fatalities and serious injuries by 2025 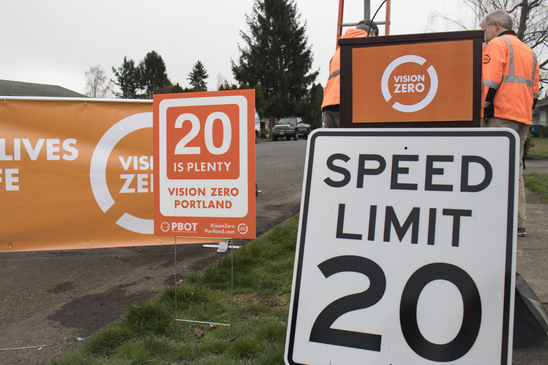