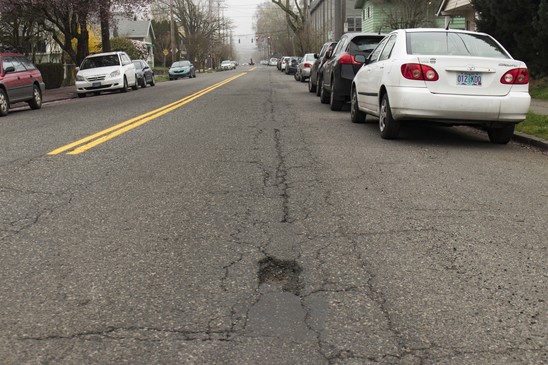 SE 50th Avenue from Hawthorne to Division will be repaved to prevent further street deterioration. Photo by Mychal Tetteh, Portland Bureau of Transportation.

(March 27, 2018) The Portland Bureau of Transportation broke ground today on the SE 50th Avenue Paving Project, the first Fixing Our Streets project of the 2018 construction season. The first of 19 projects breaking ground between March and August, the $1.1 million project will pave the street from SE Hawthorne to SE Division and update street corners with ADA ramps to prevent further pavement deterioration and improve overall street accessibility. Work on SE 50th Avenue will require intermittent lane and sidewalk closures as workers begin curb ramp construction on the 26 street corners slated for ADA curb ramp upgrades through late May, before requiring additional lane closures and detours for paving work in June. The project will be completed in late June.

The 19 projects going to construction this spring and summer range from a $200,000 Neighborhood Greenway on SW/NW 20th to a $3.5 million paving project on SW Vermont Street from SW Oleson Road to SW Capitol Highway. In total, approximately $20 million in Fixing Our Streets projects will begin construction in the next six months.

Construction will impact neighborhoods across the city, with projects taking place in all five quadrants of the city. Among them:

In addition, PBOT’s maintenance bureau workers continue their ongoing, Fixing Our Streets funded work of guard rail replacement and base repair street replacement. Fixing Our Streets projects make up approximately 20 percent of the investments in Portland’s transportation infrastructure this construction season, with a total of approximately $105 million being invested in capital projects, street repair and safety between now and September 2018.