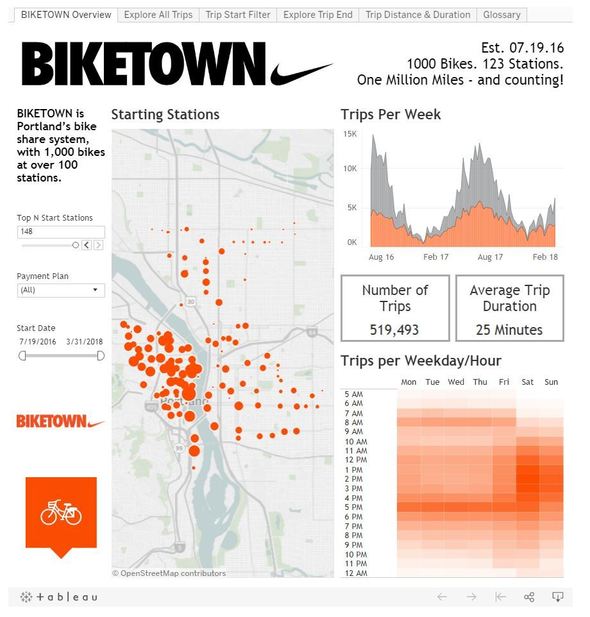 BIKETOWN's new, interactive data dashboard provides the public with an inside look at how the bike share program is used by riders.

Since the launch of BIKETOWN on July 19, 2016 through March 31, 2018, users have taken 519,494 trips totaling 1,058,081 miles. PBOT will update the System Data page quarterly and the bureau plans to release additional data showing trip patterns in the coming months. The BIKETOWN System Data page (BIKETOWNpdx.com/system-data) includes a BIKETOWN Dashboard. The dashboard allows the public to explore the data and use it on their own. This includes interactive features that allow the public to graphically display BIKETOWN’s trip data by specific search criteria, such as month, station location, frequency of trips per station, trip length, trip distance, and member type. The data is available as a downloadable file for transportation planners, developers, graphic designers and other interested parties to utilize in their own work and to understand how BIKETOWN is helping Portlanders get around the city.

Since BIKETOWN's launch, 111,000 people have used the bike share system. There are 3,469 current annual members. The average trip length for all users is 2.04 miles and the average trip time is 25 minutes.

BIKETOWN weekday usage is highest on weekdays during evening peak commute hours between 4:00 to 6:00pm. Ridership is strong throughout the weekend. The busiest month was July 2017, when users took 54,470 trips.

PBOT uses BIKETOWN ride data to help identify areas of demand and to think broadly about system improvements and efficiencies. The data is aggregated to protect user privacy.

Among local users, 25% of BIKETOWN trips replace automobile trips. An amenity for Portlanders and visitors alike, local residents using the system make up the majority of BIKETOWN trips. Learn more about BIKETOWN at www.biketownpdx.com

About Nike
Nike believes in the power of sport and physical activity to help strengthen communities. As a longtime partner with the City of Portland, BIKETOWN highlights the company’s commitment to make Portland even more active, vibrant and innovative. As part of this collaboration, Nike designed the innovative visual identity for the program’s standard bike which is the highly identifiable orange that is synonymous with Nike. In addition, Nike oversees the design and branding of the system’s logo, stations and physical presence, as well as a select number of limited edition bike wrap designs, including: the Nike Air Max 95, Nike Air Trainer 1 and Nike Air Safari, BETRUE and five soon-to-be designs resulting from the BIKETOWN Design Challenge.

About Motivate
Motivate is a global leader in bike share. A full-service bike share operator and technology innovator, Motivate works to re-envision how people experience and move around cities. Motivate operates over 75% of the bike share fleet in North America, including the four largest systems in the US: Citi Bike in New York, Divvy in Chicago, Capital Bikeshare in the D.C. area, Bay Area Bike Share (San Francisco Bay Area) and Hubway in the Boston area. International Motivate bike share systems include Bike Share Toronto and Melbourne Bike Share (Australia). www.motivateco.com