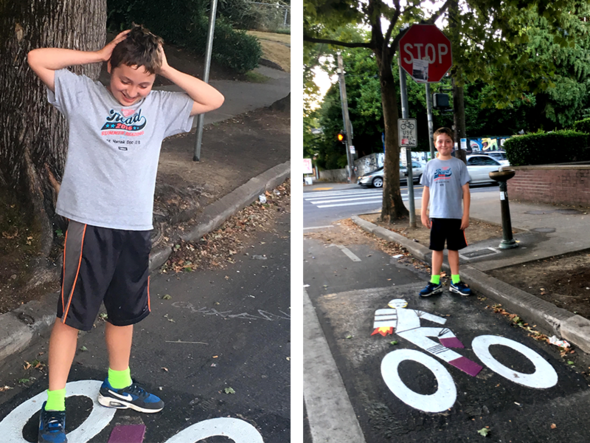 Brooklyn Kavanagh, first place winner of his age category in 2017, sees his bike lane art design on the street for the first time. Photos by Kelsey Kavanagh.

(May 2, 2018) The Portland Bureau of Transportation (PBOT) and Multnomah County Library, with support from Metro, are celebrating Bike Month with “Bike to Books,” a program to encourage residents to ride their bicycle to their local library.

As part of the program, PBOT and Multnomah County Library are bringing back Portland’s “Bike to Books” Bike Month coloring contest. Students living in Multnomah County from Pre-Kindergarten to 12th Grade are invited to design bike lane art for installation in one of the City’s bike lanes. Portland’s bike lane art, found in bike lanes and on neighborhood greenways across the city, is well known nationwide. Designs are created by crew members on their own time using leftover materials that would otherwise go to waste. In 2017, in the first year of our Bike to Books program, PBOT crews installed four winning Bike to Books bike lane art designs near each winning artist's neighborhood library branch. 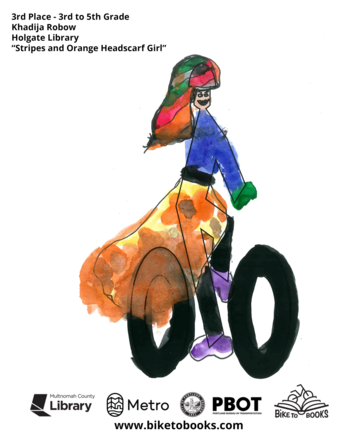 It's easy to enter, with a variety of great prizes. Young people in Portland and Multnomah County can submit their own designs using the bike symbol coloring page. The winning art will be installed on a bike lane this summer by one of PBOT's striping crews. Second prize winners will each receive four full-day passes to ride your bicycle at the Lumberyard Bike Park (including rental bikes and safety equipment if needed) and third prize winners will win a bike helmet from Portland-based Nutcase Helmets. Coloring pages can be picked up at all Multnomah County Library branches (click here for locations) or downloaded online. Contestants must drop-off their entry at a library branch in person, to be entered into the contest. Full contest rules are available online.

“We want every Portlander to feel they have a voice in the way we design our city and the earlier we can get our residents involved the better,” PBOT Director Leah Treat said. “This student-designed bike lane art is, in many ways, the beginning of the conversation between PBOT and the young people of Portland who will use our roads, bikeways and sidewalks for decades to come. If they can design such creative art for our streets, imagine the other ideas they’ll bring to us in the future. We’re excited and we’re listening.”

“Libraries are about creating connections for people of all ages to learn and create,” said Multnomah County Library Director Vailey Oehlke. “With Bike to Books, we’re teaming up with important partners in PBOT and Metro to share the joy around reading, learning and biking with an eye toward safety and sustainability.”

Books and bikes are two pillars of Portland culture. One of the busiest public libraries in the United States, Multnomah County Library is beloved by the community it serves. In addition, Portland’s young readers bike to school in record numbers. Today, thanks to PBOT’s Safe Routes to School Program, 36.8 percent of trips to school in Portland are on foot or by bike – among the highest in the nation.

Multnomah County Library is the oldest public library west of the Mississippi River, with a history that reaches back to 1864. Today, Central Library and the other 18 neighborhood libraries that make up the library system house nearly 900 computer stations for the public and a collection of two million books and other library materials. As Oregon's largest public library, Multnomah County Library serves nearly one-fifth of the state's population with a wide variety of programs and services. Learn more atwww.multcolib.org.