Frequently Asked Questions about the Fixing Our Streets process 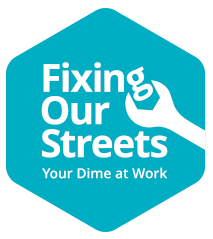 What types of projects will you be installing?

Housed within the City of Portland's Bureau of Transportation (PBOT), Safe Routes uses infrastructure improvements (such as crosswalks) and educational campaigns to improve safety, reduce congestion, and encourage physical activity.

While the program promotes active ways to get to school, the program also works to promote safe travel to school no matter how what method families and students use to get to there.  We believe student safety is everyone’s responsibility, whether you are driving, biking, or walking.

SRTS currently serves more than 100 public elementary, K-8, and middle schools in Portland, with plans to expand and work with high schools in the future.

Fixing Our Streets is Portland’s locally funded street repair and traffic safety program that will bring much needed street improvement and safety projects to neighborhoods across Portland. In May 2016, Portland voters passed Measure 26-173, approving a 10-cent gas tax and Heavy Vehicle Use Tax.

Expected to raise $64 million between 2017-2021, 56% of the money will fund street maintenance and 44% will fund safety improvements. Safe Routes to School will receive $8 million of the safety funds.

There were three main steps used to identify projects:

1) Gather feedback from parents, students, and school administration about current walking routes to school and barriers that families experience in getting there safely.

2) Identify primary walking routes for each school. These will be the Primary Investment Routes where PBOT will focus improvements. For most schools, there are about four to six routes that most students will use when getting to school. We are working to invest in these routes to support families and neighborhoods.

3) Identify and prioritize traffic safety projects along the Primary Investment Routes. These will be built first with the Fixing Our Streets SRTS funds.

This process created a prioritized list that will move projects forward faster as funding becomes available.

Safe Routes hosted nine open houses in 2017 (one in every Portland Public (PPS) high school cluster and one for the Parkrose District) and engaged families and schools in the David Douglas, Centennial, and Reynolds School Districts. The most important information gathered was the walking routes families take to school and barriers they face in getting there safely. Language interpreters were provided as necessary for each open house. An online open house was also available in Spanish and Vietnamese.

Oregon Walks, a non-profit pedestrian advocacy organization, led 10 community walks and two engagement events at PPS Title I schools (schools with at least 40% of their students qualifying for free/reduced lunch) through the Healthy Travel Options to School partnership. On the walks, families and students provided feedback about their walking routes.

Staff and volunteers also reviewed the past six years of parent traffic safety concerns from the annual SRTS travel survey.

Students and families consistently said they prefer not to walk more than one or two blocks out of their way to use a better route or crossing. Street crossings are the biggest barriers students face when walking to school.

Primary Investment Routes are streets likely to have the most students walking on them to access a school. They were selected by using a computer model and community input by open houses, parent surveys, and review by school leaders.

PBOT will focus projects on these streets to create complete, connected routes to school throughout the entire "walkshed" of a school. A walkshed is the area within a 1-mile walking distance from elementary and middle schools and 1.5 miles from high schools.

SRTS consultants, with recommendations from the PBOT Technical Advisory Committee (TAC), developed a computer model to identify the best and most direct routes to schools.

Existing infrastructure - preference was given to routes with enhanced crossings, lower speeds, and fewer lanes; neighborhood greenway routes were also prioritized where possible

Minimizing detours – routes were not allowed to go more than one block off the most direct route. This means some routes use crossings that are not suitable today, but those locations are where PBOT identified the need for a project

Once Primary Investment Routes were confirmed, they were reviewed to assess whether existing infrastructure provided support and comfort for children and families walking the routes to school. Speed, traffic volume, and the number of travel lanes were considered. When gaps were found, additional project recommendations were made. 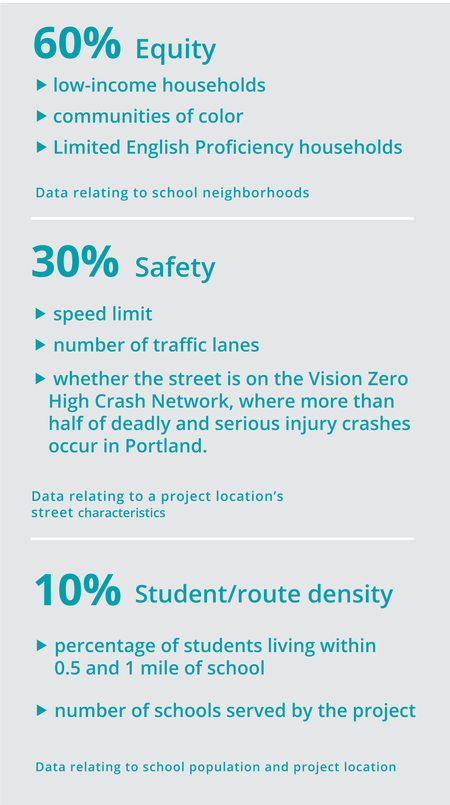 The SAC provided clear guidance that equity should be a primary factor (60%) when scoring projects. Prioritizing equity values helps identify areas of Portland that may need extra investment.

The SAC placed the next greatest priority on factors measuring the safety impact of a project (30%). Where equity scores were similar across districts and clusters, safety was the most important component of prioritization.

A project with the opportunity to serve more than one school or located where a higher percentage of students live within walking distance would receive points for student/route density (10%).

A few high-scoring projects were not selected for Fixing Our Streets funding because they are already funded through other sources and will be completed within three years.

Your project may not be on the list because:

Bicycling and vehicle improvements were not included in this planning process as the need for basic walking improvements is extensive and a priority for school communities. However, “neighborhood greenways” were included on Primary Investment Routes where possible and projects may improve conditions for people bicycling as well.

Most traffic calming projects like speed humps will be determined later, ideally connected with the installation of other projects that may alter traffic patterns.

SRTS will work with schools in the coming years to identify locations that would benefit from further traffic calming. In addition, in Spring 2018, the speed limit on residential streets in Portland dropped from 25 to 20 MPH.

What are the typical projects you will be installing?

Improve crossing: Adds a facility at an intersection that goes beyond a marked crosswalk. This may include a median island, curb extension, flashing beacons, or traffic signal.

Mark or update crosswalk: Paints a crosswalk where none exists, or upgrades an existing crosswalk.

Evaluate traffic signals: Reviews an existing intersection with a traffic signal on a major street to identify changes that may improve safety, such as signal timing.

Construct walkway: Builds a sidewalk or other type of path along the roadway to separate people walking from cars.

Construct shared use path: Builds a path for people to walk or bike on that is not necessarily along a street, like the Springwater Corridor or Marine Drive path.

Construction of Fixing Our Streets projects will begin in the summer of 2018 and should be completed by 2021.

Some projects identified by this process are already planned and funded by PBOT or other bureaus. These projects are also scheduled to be built within three years, but are not funded by Fixing Our Streets.

The rest of the projects are unfunded, though ranked by the same criteria. Having this list will help PBOT pursue additional funding. The SRTS team has committed to look for additional funding to get all these important projects completed. As new sources of funding are identified for projects we will update the project map to share potential construction years of projects.

Projects funded by Fixing Our Streets are moving forward. Any additional feedback on these projects will happen when they are in the design phase if there is immediate impact to nearby properties.

When money becomes available for unfunded projects, Safe Routes staff and PBOT will meet with school communities and leadership to ensure the project is still a high priority for their school.  If changes are requested by the school community, we will work to find a solution.

In addition, over the next year we will be adding routes and projects for schools that were not open or scheduled to be built when the project started. An example is Kellogg Middle School, which was approved for a remodel in the PPS May 2017 Health, Safety and Modernization Bond.