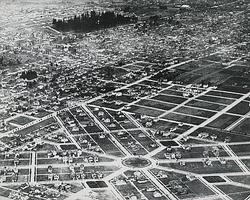 In this wonderful city that we call home, there is an amazing amount of history. In this mini-series we will explore the history of each of the regions where Portland Sunday Parkways route lead us. First stop: Southeast Portland - Ladd's Addition.

Ladd's Addition is a streetcar-era neighborhood that has been preserved to look much the same as it has since being platted in 1891. The neighborhood is named after Banker, Investor and mayor of Portland William S. Ladd, who acquired land in the neighborhood in 1878. The unique street layout was developed by Ladd with the help of his surveyor. The land developed steadily over the 19th century and became home to generations of Portland families, new and old. It is now known as Portland's oldest planned community.

Cool things that have happened in Ladd's Addition:

During an era of anti-Asian American prejudice on West Coast during the 1930's, Ladd's Addition was one of the few places in Portland that informally designated it's neighborhood for Asian American residents.

Dr. DeNorval Unthank - an American physicial and civil rights activities in Portland as well as one of Oregon's first African American doctors was once a resident of Ladd's Addition.

In 2011,the Ladd's Addition's neighbors were honored by the Cultural Landscape Foundation of Washington, D.C, an organization the brings attention to green spaces facing signification risks. Ladd's Addition was cited as one of the 12 sites nationwide under the theme "The Landscape I love," due to its 15 year battle of protecting the Ladd's American elm trees from disease.