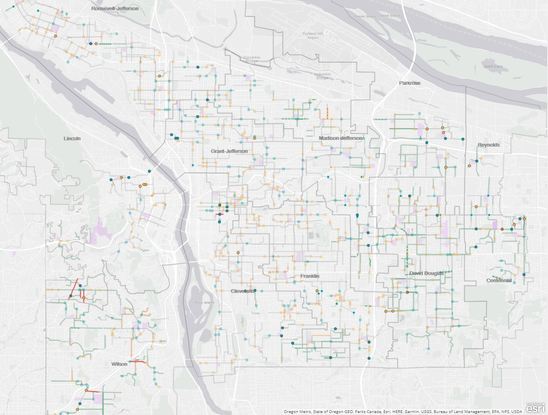 Safe Routes identified over 1,200 projects along the Primary Investment Routes throughout the city. Projects not funded by Fixing Our Streets will be incorporated into and built by other planned City improvements or will need additional funding to be implemented. Click the image above to learn about the project identification process and view the project map.

(June 14, 2018) Beginning in the summer of 2018, approximately 88 safety and improvement projects will begin to be built with the $8 million in funding from Fixing Our Streets.

The projects were chosen after an extensive, year-long public engagement process by Portland Bureau of Transportation (PBOT) Safe Routes to School program staff with school communities and a Stakeholder Advisory Committee made up of community partners and SRTS practitioners. Staff engaged families and students to identify the walking routes they take to school, and what types of traffic concerns they encountered along those routes. This information helped create the project list and a network of Primary Investment Routes where PBOT will prioritize investments in years to come. In total, Safe Routes identified over 1,200 projects along the Primary Investment Routes throughout the city. Projects not funded by Fixing Our Streets will be incorporated into and built by other planned City improvements or will need additional funding to be implemented.

Parents preferred different types of streets for their children in different parts of the city. Some prefer their children to walk on quiet back streets; in other neighborhoods, parents prefer their children walk on streets where more people are around. In areas where there are already sidewalks and good access, the most stressful part of getting to school is interacting with parents dropping students off by car. Overall, families want to see more emphasis on safety at arrival and dismissal times. Across Portland, the top concern heard by PBOT staff was unsafe crossings. Parents and students noted that major street crossings were the biggest barrier in walking to school. Missing sidewalks and traffic speed were also major safety concerns. Students and families confirmed that they prefer to take the shortest path and not to walk more than one or two blocks out of their way to use a better route or crossing.

The 88 projects were chosen in partnership with a Stakeholder Advisory Committee of schools, government agencies and community partners based on the following values:

o   Whether the street is on the Vision Zero High Crash Network, where more than half of deadly and serious injury crashes occur in Portland

o   Percentage of students living within 0.5 and 1 mile of school

o   Number of schools served by the project

Construction of the Fixing Our Streets Safe Routes to School projects will begin in the summer of 2018 and should be completed by 2021. Some of the types of projects being installed are:

Over the next year, PBOT will be adding routes and projects for schools that were not open or scheduled to be built when the project started. An example is Kellogg Middle School, which was approved for a rebuild in the PPS May 2017 Health, Safety and Modernization Bond.

Portland’s Safe Routes to School staff are excited to share the Fixing Our Streets Safe Routes to School map of Primary Investment Routes for each permanent public elementary, K-8, and middle school and identified safety projects along those routes. You can find the map, details on projects, routes, and the process at SafeRoutesProjects.com

Portland’s Safe Routes to School initiative (SRTS) is a comprehensive equity-focused program to improve walking and biking conditions around schools. Partnerships and collaboration with schools, community organizations, regional agencies, and neighborhoods are central to the program’s success.

Fixing Our Streets and Safe Routes to School

The Fixing Our Streets program allocated $8 million for to make routes safer and more convenient for kids to walk, bike and roll to school. With over 100 schools through the city, the need for street improvements to support safe travel to school is greater than the Fixing Our Streets funds available. Fixing Our Streets tasked SRTS to find out what changes Portlanders would like to see around their schools, and develop a process to target and prioritize safety investments.

Read about the public engagement process, what we heard from school communities, and read answers to our Frequently Asked Questions on our project story map.