Join us on July 22 to experience the “early days” of the Green Loop, a “Big Idea” from the recently adopted Central City 2035 Plan.

You may have heard of it, but … what exactly is it?

The Green Loop will be a six-mile linear park around the heart of Portland’s Central City, with ample room for people to play, wander, walk or ride a bike.

It will be a place for everyone in the heart of the city. Whether on foot, bike or mobility device, people of all ages, abilities and incomes will be able to get to work, go for a jog, shop, eat, rest or meet friends in the park via the Green Loop.

The Green Loop is quintessentially Portland: natural and urban, creative and entrepreneurial, sustainable and dynamic.

It's a movement to help people immerse themselves in the urban core in a new and exciting way, along trails and pathways that offer unique experiences and encounters with nature, art and each other.

The Green Loop will support businesses and social services, improving access to places where people can get the staples and support they need. And it will reconfirm Portland's commitment to greater access to parks and active transportation.

In turn, the Green Loop can become an iconic symbol of a city that values and supports all people: residents, workers, students and visitors of all ages, shapes and sizes, origins and incomes.

The Central City is the region's hub — with more jobs, housing and cultural attractions than any other city in the tri-county area. And more people and jobs are coming. 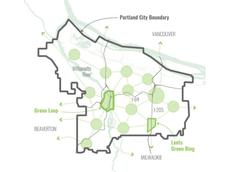 As Portland grows and more people need to get around the city, we’ll need new ways (and infrastructure) for people to move in, around and through the heart of the city. The Green Loop offers a clear “artery” that won’t be clogged with cars and buses.

The Green Loop will support the growth of jobs and housing in the city center, create and connect green spaces, and offer signature public spaces for all to enjoy and experience. It will give people unprecedented access to the heart of Portland, stringing together nearly a dozen distinct districts that surround the Willamette River, each with its own history, attractions, communities, and unique look and feel.

While the Green Loop will be in the Central City, it will serve people all over Portland and the region. Whether you live in Southwest, North Portland, East Portland, or the Inner Eastside, the Green Loop will connect to bikeways that can take you to the heart of the city and back home safely and easily.

There are some segments of the Green Loop that largely exist today — like SW Moody to the Tilikum Crossing Bridge across to OMSI. And key links of the alignment will get built with other major capital improvement projects, such as the Sullivan's Crossing bike and pedestrian bridge over I-84, which will break ground in 2019. Or the U.S. Postal Service redevelopment site.

The Green Loop is still a concept, however. Public process to date has helped establish the general alignment along the Park Blocks on the west side and SE 6th or 7th through the Central Eastside and Lloyd Districts. But there is still more community engagement needed to work through design alternatives as well as design and engineering work to do prior to construction of the entire loop.

How will it be funded?

While specific funding sources for the Green Loop have not been determined, the project will require its own fundraising campaign.

But it will not take away funding already slated for other active transportation projects around Portland. Similar projects in other cities have raised funds through combinations of public financing, state and federal grants, and private philanthropy. Currently, the Green Loop is not expected to be built all at once, so its funding strategy will likely use a phased approach.

Projects like the Green Loop add value to their cities. Think New York’s Highline, the Atlanta Beltline and Indianapolis’ Cultural Trail. These infrastructure revitalization projects began as ideas from the community, which were subsequently — and enthusiastically — embraced by the public. The Green Loop will also need both public and private support to get started.

And like the Highline, Cultural Trail and Beltline, the Green Loop can stimulate billions of dollars in private investments, expand property tax bases, attract new businesses to the urban core and generate thousands of new stewards of vibrant places.

So, look for booths at the Trailblazers Plaza and the northern and southern end of the Sunday Parkways crossing over I-84. We’ll be there sharing information about the Green Loop and how it meets our Central City in Motion goals.

Who knows? Someday you’ll be able to say, “I was there at the beginning.”

Find out more about the Green Loop Vision

Watch the video of the Council session and the Green Loop resolution vote (Green Loop starts at 2:20)