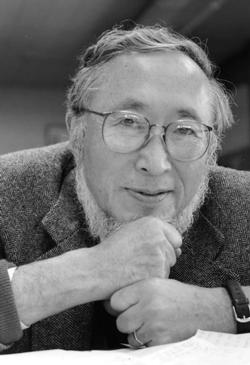 Visualize Portland’s waterfront promenade - calming cherry blossoms trees, bustling visitors and Portlanders, the sound of gulls and springtime laughter. This scenic Portland destination is a microcosm of the history which resides within Portland's historic Old Town. Central to the Tom McCall waterfront park stands the Japanese-American Historical Plaza, a permanent memorial dedicated to Oregon Nikkei (Americans of Japanese ancestry) imprisoned by the U.S. government throughout WWII. The memorial, an impactful and stoic installation of sculpted stone laced with haiku’s, showcases the history and experiences of the Oregon Nikkei community following the enactment of Executive Order 9066. This installation, unveiled by the Oregon Nikkei Endowment in 1990, was made possible by the work and ingenuity of Portlander, Bill Naito, from which Naito Parkway gets its name.

Bill Naito was born in 1925 to Hide and Fukiye Naito to two immigrants from a village outside of Kobe, Japan. Bill grew up on the Eastside of the city and attended Washington High School.  Following the 1941 bombing of Pearl Harbor, the Naitos fled to family in Utah to escape the imprisonment of Americans of Japanese ancestry. Following his high school graduation in Utah, Bill joined the 442nd infantry regiment; the most decorated unit in American warfare history. Bill also worked as a staff sergeant in military intelligence during the U.S. occupation of Japan. Bill was discharged in 1946.

Bill later returned to Portland to study economics at Reed college, followed by a master’s in economics from the University of Chicago. Halfway through his doctorate at the University of Chicago, Bill returned to Portland to help run the families import business, a childhood staple which would foreshadow his lifelong work as an innovator of business and buildings.

Throughout Bill Naitos time as one of Portland's most influential entrepreneurs and businessman, Naito demonstrated a deep care for the maintenance of Portland's history, expressed through architecture and urban planning. Naito focused his efforts in the renovation and revitalization of Portland's historic buildings across the city, but especially in Old Town. Bill, and his brother Sam, purchased and renovated upwards of 20 historic buildings in Portland. Prominent real estate includes Montgomery Park in 1985, and the Galleria, previously called the Olds, Wortman & King building, Portland's first downtown shopping mall, in 1975. In addition to Bill’s work as a businessman, he was a philanthropist with a strong conviction to improve civic engagement and the well-being of all. Bill helped the city of Portland plant over 10’000 trees and was the finance chair of the Oregon Nikkei Endowment. His contributions to the Oregon Nikkei Endowment made the Japanese-American Historical Plaza in Tom McCall Waterfront Park possible and a lasting monument for future generations to experience.