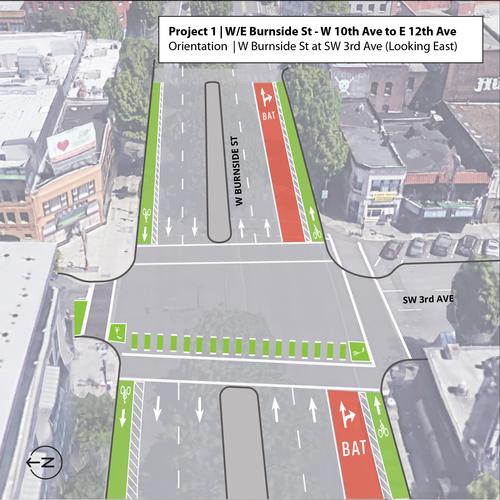 (Sept. 5, 2018) Following extensive data collection, dozens of stakeholder meetings, and thousands of public comments, PBOT’s Central City in Motion project has focused in on 18 projects that will help manage job and population growth. An economic hub for the entire state, the Central City’s population is projected to triple and the number of jobs area will increase by 40 percent by 2035.

We can’t add more streets to the Central City, so as more people and businesses use the system, we will need to make it more predictable, reliable and safe. Each of the 18 projects under consideration is designed to do just that, making our streets more efficient with investments in bus lanes, protected bikeways, and safer pedestrian crossings. Today, PBOT is launching the third of a series of online open houses where you can learn about the 18 Central City in Motion projects and weigh in on which PBOT should construct first.

PBOT does not have enough funding to build all of the projects proposed, so we need the public’s help to determine which ones should be prioritized for construction over the next five years. The 18 projects include 88 safer pedestrian crossings, about nine miles of bus lanes, and about 23 miles of bikeways.

Join us in our third online open house to see what PBOT is proposing and weigh in on your top priorities. This is the third of a series of three online open houses that will be used to create a project implementation plan to be presented to City Council, tentatively set for late October. The interactive interface allows the public to select individual projects and see renderings from a bird’s-eye view, project descriptions and cost estimates of each to the projects, as well as understand the tradeoffs between the proposed and existing conditions. A dynamic budgeting tool allows Portlanders to create and submit their own prioritized project lists, providing valuable input to our project team. The open house also shares information gathered from previous outreach, showcasing how prior input shaped the 18 projects currently under consideration.

PBOT is also offering Portlanders the opportunity to learn more about the 18 proposed projects and provide their input in person.

Join us at a Central City in Motion Open House:

View the projects and provide your thoughts now at an online open house, available through September 18th, 2018.

In addition to this broad-based public engagement, PBOT has convened a Sounding Board to ensure a wide set of community and business perspectives are incorporated in the project. With the assistance of Sounding Board members, PBOT has convened focus groups and targeted surveys with residents living on low-incomes at Central City Concern properties, members of the disability community, and hotel and service workers, to better understand the varied needs of Portlanders who live and travel in the area.

For more information see the project web site. To request a meeting with your community group, contact project manager Gabriel Graff, 503-823-5291 or gabriel.graff@portlandoregon.gov.