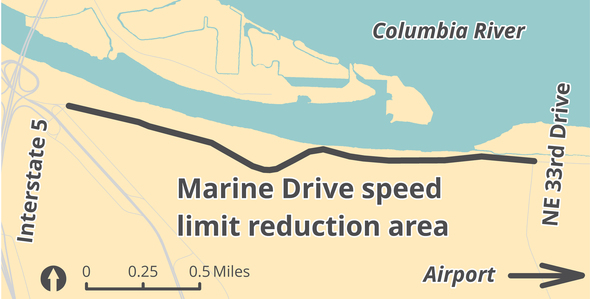 (Sept. 24, 2018) -- The Portland Bureau of Transportation will reduce the speed limit on  a two-mile stretch of North Marine Drive, between Interstate 5 and NE 33rd Drive, starting Tuesday Sept. 25, from 40 mph to 35 mph.

PBOT won state approval for the change, as part of the City's Vision Zero effort to eliminate traffic fatalities and serious injuries, on Aug. 30.

There were 140 reported crashes, including six people seriously injured, on this segment of Marine Drive, where the speed limit will be reduced, from 2012 to 2016, the most recent five-year period for which data are available.

The Speed Safety Camera on eastbound NE Marine Drive, which were installed in February, will issue warnings starting Tuesday for two weeks. Citations will resume Oct. 10.

The goal of the Speed Safety Camera program is to reduce speeding and save lives. Marine Drive is one of 30 streets that comprise Portland's High Crash Network. The roads in this network make up just 8 percent of Portland streets, but account for 57 percent of fatal crashes citywide.

In addition to the new speed limit, PBOT is delivering a variety of safety projects on Marine Drive including several in East Portland. Slated for construction starting in early 2019 on Marine Drive: