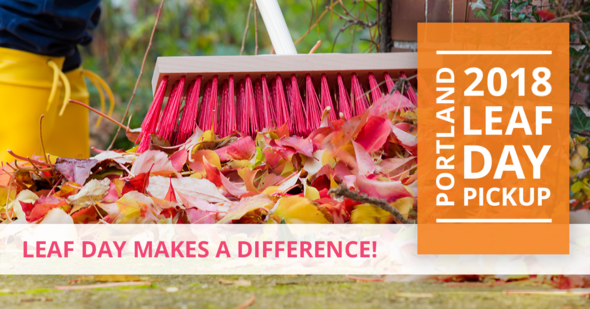 (October 2, 2018) Today, the Portland Bureau of Transportation announced that it would no longer charge Portland residents to pick up leaves during Leaf Day, the City's annual fall leaf clean up program. PBOT also released the 2018 Leaf Day schedule. The first day of this year's Leaf Day will be November 9th.

For decades, the bureau has collected leaves and swept streets in designated Leaf Districts, locations that account for the vast majority of leaves that fall on city streets. In 2010, the bureau started charging a fee for the service to recover the city's costs during the Great Recession.

“When a policy is not meeting its intended goal, we shouldn’t be afraid to reevaluate it and change course if necessary,” said Commissioner Chloe Eudaly. “That’s what we’ve done with the Leaf Day fee. It never met its goal as a cost recovery measure. By ending it, we will save on administrative costs, our streets and storm drains will be cleared and Portlanders will have one less fee to pay.”

"This year, we're introducing a big change to Leaf Day. We're making it free," said Chris Warner, PBOT's Interim Director. "We know the public appreciates this service, which keeps our streets safe for everyone and reduces the chance of street flooding. But the fee we started collecting in 2010 never met its goal of covering the city's costs. In addition, the cost of administering the fee have been quite significant, adding up to almost 20% of program costs. Finally, more and more Portlanders have opted out of the program over the years. Given all these factors, we decided it made financial and policy sense to return to providing this service free of charge."

Since 2010, PBOT charged residential customers $15 per leaf removal. Commercial and multi-family properties with over four units were charged $65 per removal.

During the years when PBOT collected a leaf fee, the revenue never covered the operational and administrative costs of the program. In fact in the last five years, leaf fee revenues have covered less than 50% of program costs. Starting with this year's Leaf Day, leaf removal will be funded through general transportation dollars, much like other services such as snow and ice removal, pothole repairs and roadside vegetation clean-up.

Besides the end of the leaf fee, the other aspects of Leaf Day will not change. Starting  November 9th, PBOT crews will remove leaves in 52 leaf districts across the city. Residents in the leaf districts should move their cars and other obstacles from the street and limb their street trees prior to their Leaf Day service to facilitate a more effective clean-up.

(View all districts on our interactive Leaf Day map) 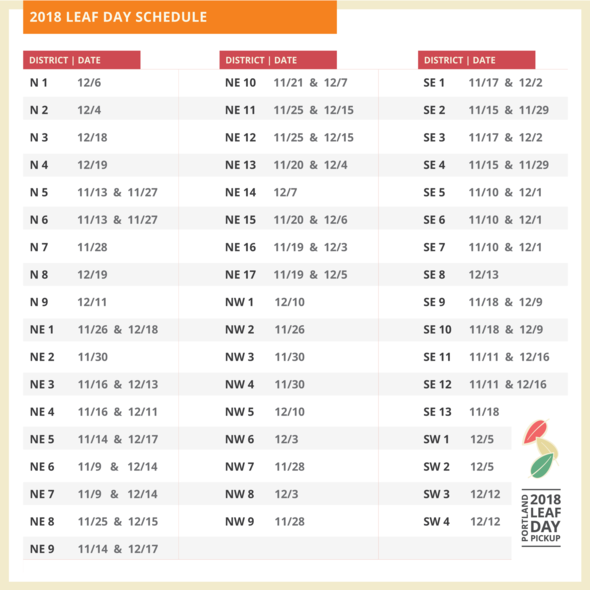